Toads Of The United States
Poison Dart Frogs And Toxicity
Venomous Or Poisonous?

One of the joys of keeping dart frogs is setting up a beautiful terrarium filled with tropical plants. After all, these plants will be there for you to look at all the time, even when the frogs are not visible. Here we will examine appropriate plants for the thumbnail dart frog terrarium.

The tropical plants section at any nursery will offer a variety of 4-inch pots with assorted tropical plants. Most of them will grow and thrive in your terrarium, but the problem with many of them is that they simply grow too fast and get too large for the relatively small terrariums most keepers house their frogs in. You can use these plants and attempt to keep them pruned back, or you can select plants that will remain smaller and not grow as fast. Regardless, as time goes by, you will need to get the scissors out and do some cutting, if only to keep one plant from dominating the tank. 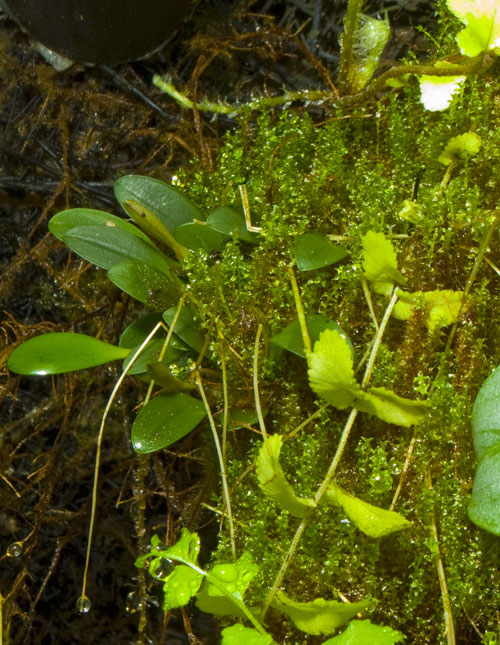 Tropical Plants to Consider For Your Dart Frog Vivarium

Calathea species: These plants typically have leaves with bright markings. Often the leaf underside is red. Many species grow too large for the terrarium, but they grow fairly slowly, and can be cut back easily if they grow too large.

Anthurium species: A few species of this family can be used in the terrarium, even though most species will grow too large for all but the largest terrariums. Like those in the Calathea genus, this group grows fairly slowly and can be cut back to fit the terrarium.

Pothos vines: Pothos is the ubiquitous plant found in offices and other areas that receive poor light. This vine is tolerant of low-light levels, and it will still grow well. If you are not planning on using a lot of light, this is an ideal candidate. What it lacks in color, it makes up for in enthusiasm!

Ficus vines: The Ficus genus is a large one, with many different types of plants encompassed under that name. A common vine in the terrarium hobby is Ficus pumilia, which will eventually grow to cover all that comes before it. It grows slowly, though, and can easily be pruned to keep it in check. The leaves are around the size of a dime, and they are a lovely dark green. Another even smaller Ficus vine is the oak leaf ficus (Ficus quercifolia), which has tiny leaves the size of a pea and will also grow to cover almost any surface.

Tropical gingers: This is a large family of plants, most of which grow too large for the terrarium. However, there are quite a few species that stay smaller. Several Asian forms stay small and occasionally produce unusual-looking purple flowers.

Bromeliads: One kind of plant you should strongly consider for your thumbnail frog tank is the bromeliad. Like dart frogs, bromeliads are native to the Americas. Bromeliads are typically a rosette of strappy leaves with water pools around the center of the plant. While bromeliads are sometimes seen planted in pots, in nature, most are epiphytic and grow on tree limbs high above the forest floor. An epiphyte is a plant that grows on things other than soil. They use their roots to hold to tree limbs or rocks, and they take in water and nutrients from the water and debris collected by the plant.

Bromeliads are perfect in many ways for thumbnail dart frogs. They are unique and add visual interest. Bromeliads will also be used by thumbnail and other frog species to court and breed in, as well as to just hide in. There is a lot of useable space for a frog in a bromeliad. Highly variable in size, bromeliads range from plants no larger than your fist up to plants the size of a car. Most of the commonly available bromeliads are too large for small or mid-sized tanks. In order to find smaller bromeliads, you will have to order them from a specialty supplier, but they are well worth while. Small bromeliads, ones with a diameter of less than 10 or 12 inches, can be mounted on the back wall or to the terrarium wood. They require a lot of light, and you will want to keep this in mind when positioning them in the tank. Place them under the light or reasonably close to the tank’s light source, say within 6 or 8 inches of the light. You will probably need at least two standard fluorescent bulbs over the tank to make bromeliads thrive. Despite all their demands, these plants are distinctive, colorful and beautiful, and it is definitely worth making the effort to accommodate their requirements.

Ferns and Mosses For Your Terrarium

A variety of different options are available to you if you would like to have moss in your terrarium, but for the most part, its going to take some patience!

Pillow or live moss: Products like “pillow moss” or live moss are offered by many vendors, and they can offer a beautiful accent to your terrarium. However, all too often these will fail to thrive, turn brown and slowly die. The tropical terrarium is too wet for many of these mosses to do well. However, if you are patient, you can use these mosses to create new moss growth in the terrarium. Simply take the moss and crumble it into a powder, then rub this powdered moss onto the terrarium’s surfaces where you would like moss growth. Places such as backgrounds and terrarium wood come to mind. Moss grows best when it is not constantly wet and gets good light. It will also grow on the terrarium floor if you sprinkle the powdered moss in places where there is good light. This new growth moss will thrive in your terrarium, and will slowly grow to cover large areas of the terrarium. I am not sure why the new growth thrives while the original did not. It may be because the original plant colony was removed from a habitat that it originally grew in, and the terrariums conditions were too different for it to survive.

One of the fun aspects of the wild mosses is that they invariably contain fern spores. With wild moss you never know what kind of fern you will get, but they are all attractive, and if they begin to grow too large for the tank, you can cut them back. The most common types we have had pop up out of live moss at our facility are a variety rabbits foot fern, so called due to the large, hairy root the plant produces called a rhizome.

Java moss: Another moss occasionally available is a semi-aquatic species called Java moss. There are many types of Java moss and some disagreement if it even belongs in the Vesicularia genus. Java moss is usually available as a “cutting” that you place in the tank, preferably in water. It will then spread throughout the tank and potentially cover every surface in a thick layer of dark green. Some love it, but many find it a bit too much, as it’s a fast grower, and the color is not as appealing as the bright green of many terrestrial species.

Club moss: One genus often offered by terrarium plant dealers is Salaginella, sometimes called club moss. While called moss, however, it is actually more closely related to the ferns. It forms a lacey, light bluish-green ground cover. It can be a little difficult to establish in the tank, but once you get it going, it is hardy and very attractive.

Orchids and Flowering Plants For Your Vivarium

For flowering plants, there are not as many choices, but there are a few.

Calathea genus: Many forms of the genus Calathea carry small flowers, but the colorful leaves generally outshine the small blooms. This is sometimes the case with the Begonia genus as well. Many Begonia species do well in the terrarium, but the flowers of most are smaller and not as attractive as the multicolored and interestingly textured leaves.

Orchids: There are thousands of orchid species, and while most are unsuited for the terrarium, a few dozen species that hail from rain forests do well in the warm, humid environment of the dart frog terrarium. Most are considered miniatures and are epiphytes. Mount these epiphytes on your background or on terrarium wood in good light, and in many cases they will thrive.

There is a large family of orchids from Central and South America called Pleurothallids, which contains several good terrarium candidates. Another choice is the common orchid species, Phalaenopsis, also called moth orchids. These species typically have several long, flat leaves and large flower spikes when in bloom. These plants usually bloom readily, and if the blooms are kept from getting wet, the bloom spike will last quite a while. The challenge may be finding a plant with a bloom spike that will fit in your terrarium. Some miniature Phalaenopsis are offered, but to find these, you will likely have to search online.