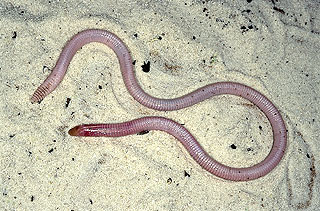 Is the worm lizard actually a herp?

I’m fascinated with a herp — I think it’s a herp — called a worm lizard. Why doesn’t anyone ever talk about or show pictures of worm lizards? I’ve also heard there’s a “worm snake” now in this country. Is it the same thing?  Supposedly, people often confuse them for earthworms, but I remember seeing a picture in an old book showing one with legs. If you know anything about them, please clarify what’s going on with this confusing group.
Jessica Landrowe
Brunswick, Georgia

The group that’s baffling you is the Amphisbaenia, a subgroup of the larger order Squamata, which includes snakes and lizards. You may refer to amphisbaenians as lizards if you wish, but just think of them as existing on the outer fringes of lizardhood. Pure taxonomists might have to justify that simplistic statement with mountains of further explanation, but I sense your interest is not aimed in that direction.

Amphisbaenids can be found across most of the world’s tropics and subtropics, though they are surprisingly absent from most of Asia. Because of their underground lifestyle, they are among the least-studied “herps.” And when they are unearthed, often they aren’t recognized for what they really are.

You may be thinking, “Too bad such curious creatures live so far away.” In fact, the U.S. does have a single native amphisbaenian, and it lives just south of you. The Florida worm lizard (Rhineura floridana) inhabits sandhills and oak forest down through the north and central parts of the Florida peninsula, and apparently is known to occur (barely) into southern Georgia too.

This is a very wormlike herp, even down to its having rings (annulations) around its body. It’s mainly a pinkish-white color with no legs, furthering the confusion some people have differentiating it from its namesake. It grows to about a foot in length and the thickness of a pencil. Worm lizards spend virtually their entire lives underground, except when flooded out by heavy rains.

The most lizardlike amphisbaenian has to be the ajolote. The one you recall was possibly in Archie Carr’s classic The Reptiles volume of the Life Nature Library. It’s more commonly called the Mexican worm lizard (Bipes biporus) and lives in the lower half of Mexico’s Baja California peninsula. It may be the most studied of them all, at least as lab dissections, as more than 4,000 specimens now reside in jars of formalin at universities. Yet relatively little has been learned about their natural history due to the difficulty of observing an animal that’s underground nearly its entire life.

They are pale pinkish-white in color, grow to about 9 inches long and have only powerful little front legs. The number of claws on those legs varies in each of the three species, the other two of which occur on the west coast of mainland Mexico.

Dig out your November 2003 issue of REPTILES for more details on ajolotes in Carl Franklin’s “Baja Dreaming” article.

Worm snakes are totally different animals. They are slender “sexless” (parthenogenic) snakes that have been spread worldwide in potted plants. They live in many parts of Florida already and probably other locales too. A picture can be viewed in this column in the August 2003 REPTILES. Isn’t it great to keep those old issues handy for reference?