What Is Up With New Jersey And “Large” Snakes On The Loose?

What is up with New Jersey and "large" snakes these past few weeks? First it was the as yet unfound and seemingly non-existent green anacond

What is up with New Jersey and "large" snakes these past few weeks? First it was the as yet unfound and seemingly non-existent green anaconda that was allegedly swimming around Lake Hopatcong, and this week it is a story of a "10 foot" boa constrictor that escaped its enclosure. A neighbor then spotted the snake in a tree eating a seagull and shot a photograph of it, which caused a minor panic in the Villas in Lower Township, according to various news reports.  The mainstream media has called the snake all manner of things, including a renegade, large snake. It turns out the snake, a red-tailed boa constrictor is not that large at around six feet in length, and the owner has come forward.

Caring For The Red-Tailed Boa Constrictor 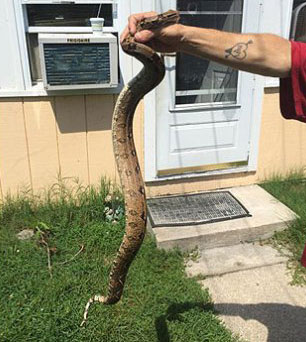 The twin to the boa constrictor that is on the loose.

According to CBS News, the owner, who was not identified, had it out about a month ago when he was drinking in his back yard and it got loose. The Press of Atlantic City has a different story to tell. Its news report says the owner was cleaning out the snake's enclosure and he let the snake in the yard to crawl about when it escaped the yard. There was no mention of drinking in this report. This snake was initially reported to be around 12 feet in length, according to various media reports. The owner confirms the snake is a red-tailed boa constrictor. Authorities, who have spoken to the owner, now say the snake is six feet in length.

Amazing what information gets bandied about by the mainstream media when a snake gets loose or is "spotted." Is it a Jersey thing?