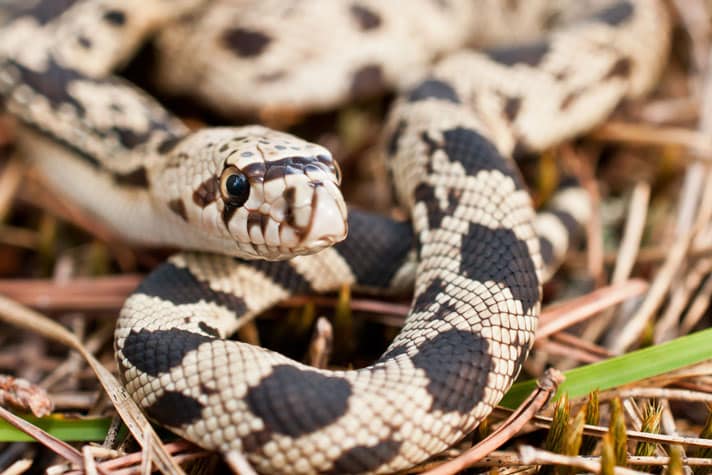 Pine snake (Pituophis Spp.) Pine snakes are a smaller component of a larger group of American snakes belonging to the genus Pituophis. Of the actua

All of the pine snakes are available in captivity but some may require a little searching to find them. The most commonly available are the species from the southeastern United States – The Northern pine, The black pine, Florida pine and the Louisiana pine. All species of pine snakes are bred fairly regularly in captivity though occasionally wild caught snakes are still offered. Pine snakes over much of their range shares protective status of one degree or another so it is important to be aware of laws regarding this species before you acquire one. Pine snakes can thrive with attentive owners who prioritize the proper husbandry and purchase their species specific snake supplies.

Most of the pine snakes are large, massively built snakes which attain lengths within the range of eight feet. The smallest of the group is the Louisiana pine snake which reaches adult lengths of about five feet. Females of all species typically have a heavier build than the males.

Pine snakes are relatively long lived snakes. They can live upwards of 20 years in captivity. Minor variations in longevity may exist between species and captive care variables would of course influence life span.

Because of their massive size, pine snakes require a lot of space to keep them comfortable. Adult snakes can be kept in a 55 to 75 gallon glass tank with a secured screen cover. Habitat accessories can consist of large stones and a heavy branch for climbing and basking. Pine snakes are curious animals and will spend long hours exploring their environments so it is important that reptile accessories in the enclosure are placed securely. To prevent the snake from damaging themselves by looking for a way out of the enclosure, a hide box should also be present.

Pine snakes drink a lot of water so a heavy, securely placed reptile water dish should be present with clean water at all times. Pine snakes often defecate in their water bowls which can prove to be detrimental to the snake’s health.

Spilled water in a pine snakes enclosure can lead to health problems such as respiratory infections and scale rot. Keep your pine snakes dry and warm.

Suitable substrate for your pine snakes enclosure can be in the form of ground pine bark mulch a few inches deep. This will enable the snake to burrow freely, something that pine snakes do frequently in nature. Dust free beach sand is also a suitable substrate and some keepers prefer to use rubber backed commercial carpeting. Using commercial reptile carpeting makes cleaning the snake’s environment a bit easier for some keepers.

Although not necessary, full spectrum lighting can be used to emphasize the beautiful colors that your pine snake naturally carries. A light cycle of 12 hours on and 12 hours off is typical with keepers and will work well with pine snakes. A Zoo Med ReptiCare Day Night Timer can be used for cycle controls.

Pine snakes should be kept at temperatures of about 80-85 degrees Fahrenheit, with a slight reduction at night to average room temperature being perfectly fine. Day time temperatures can and should be achieved by the use of over head lamps. Climbing structures within the snake’s enclosure will enable your pine snake to thermo-regulate at will. Be careful not to let your snake over heat and never place the pine snake enclosure in direct sun light.

Pine snakes are fast growing powerful snakes which require a steady diet of rodents or poultry. Feeding you pine snake twice a week and a couple of appropriately sized prey items in a sitting will suffice. It is important not to over feed or under feed these animals. A healthy pine snake should have a roundish appearance and no portion of the snake’s skeleton should be visible at any time. On the other hand an over-weight pine snake will look “fat” and will likely have visible skin noticeable between the scales. Avoid feeding during a shed cycle because although the snake will still typically take food at this time, they often regurgitate it soon after.

Pine snakes when acquired young and after much physical contact typically become quite tractable and rather pleasant to handle. Adults and individuals that have relatively little contact with humans can be quite nervous or even aggressive at attempts you may make toward handling. Although they are a non-venomous species, a bite of any measure from a pine snake can be a painful and rather bloody experience. It is not uncommon to have to remove teeth from your skin after a pine snake bite. Pine snakes are ferocious feeders and will often respond to any activity in the captive enclosure as an opportunity to gather food. Be aware of where your individuals are within the enclosure and always exercise caution even with tame individuals.

In any event, handling of any species of snake should be kept to a relative minimum to avoid stress and the passing along of germs from keeper to the kept.

Leo Spinner is a native of Cape-Cod in Massachusetts and is owner and operator of Skin & Scales Live Animal presentations and The Spotted Turtle Herpetological Institute of Cape-Cod.