Jude will be paired with Teman in hopes of producing Varanus komodoensis offspring.

The Virginia Aquarium & Marine Science Center has finally received a female Komodo dragon (Varanus komodoensis) in a complex trade that involved sending its female to the Toronto Zoo in hopes it would mate with a male dragon. The new dragon, another female named Jude is from the San Antonio Zoo. According to the Virginian-Pilot, Chip Harshaw, the aquarium's senior curator of mammals/herpetology has been working hard for the lst year to facilitate the transfer of Jude. There is a science to transferring animals, he told the paper. 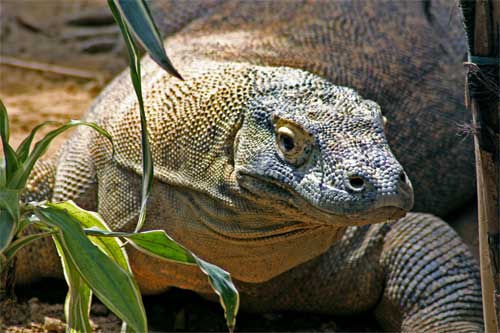 The Komodo dragon (Varanus komodoensis) is the largest lizard in the world. This endangered species is native to Indonesia

According to Harshaw, the United States has 13 recommended pairings of Komodo dragons out of the 125 that are currently in the United States. These pairings are genetically matched for optimal breeding prospects that adhere to the Association of Zoos and Aquariums Species Survival Plan. Jude, who is currently around 5 feet in length will eventually be paired with Teman with the hopes that they will produce a clutch of eggs that will grow into viable dragons. Teman is on a permanent breeding loan from the Denver Zoo. The aquarium now has two males and a female Komodo dragon. In 2010, the Los Angeles Zoo hatched 22 Komodo dragons. In an effort to widen the gene pool of this endangered species in captivity, the Species Survival Plan sent 11 of the hatchlings to Europe in hopes of more breeding success.

The Komodo dragon is an endangered species from Indonesia. It is the largest lizard in the world that can grow to 10 feet in length and weigh more than 150 pounds. A meat eater, the Komodo dragon has sharp teeth and a bacteria in its saliva that increases the likelihood of infection after a bite. They are known to take down large prey items such as deer and pigs.