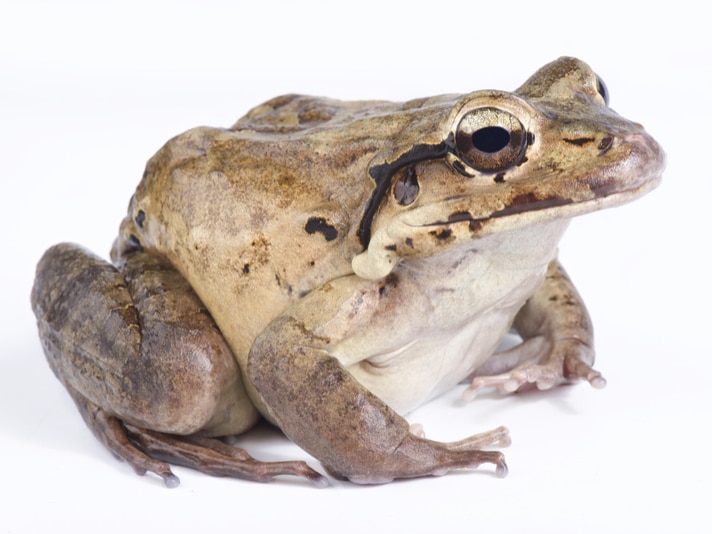 The mountain chicken frog has experienced severe declines due to the chytrid fungus and introduced species. Photo by reptiles4all/Shutterstock

The mountain chicken frog (Leptodactylus fallax), once a popular delicacy in the Caribbean and now one of the world’s rarest frog species has be

The mountain chicken frog (Leptodactylus fallax), once a popular delicacy in the Caribbean and now one of the world’s rarest frog species has been the beneficiary of a captive breeding and release program conducted by the Zoological Society of London (ZSL) London Zoo and the Durrell Wildlife Conservation Trust.

The Plight of The Mountain Chicken Frog

Herpetologists began working on a recovery program in 2009 when it was noted by scientists with the ZSL and Durrell that the mountain chicken frog populations on the islands had been decimated by the chytrid fungus (Batrachochytrium dendrobatidis) that is adversely affecting amphibians worldwide. A small group of the frogs were flown to ZSL London Zoo and the Parken Zoo in Sweden in an effort to start a breeding program with the intention of releasing the offspring back into the wild.

From just two female frogs, the herpetologists were able to raise 76 frogs, 51 of which were released back onto Montserrat this week. The frogs were implanted with tracking devices and are being monitored in an effort to gather more data about the behavior of these amphibians in an effort to aid future conservation efforts. The frogs are also swabbed when they are located to determine if there is any chytrid fungus on their skin.

“Mountain chicken frogs are one of the most endangered animals on this planet – not only are they facing threats from habitat loss, but their numbers plummeted due to the introduction of the most devastating disease known to affect amphibians worldwide, said Ben Tapley, head of herpetology at ZSL London Zoo. “The rescued frogs and their offspring were kept in a bio-secure, temperature-controlled breeding unit at ZSL London Zoo, to ensure a clean bill of health before their release back to their native habitat in the Caribbean.”

The mountain chicken frog is named as such because they  apparently taste like chicken. One of the largest frogs in the world, the mountain chicken frog can weigh up to three pounds. Previously the frogs were found on Lesser Antilles islands of Antigua, Guadeloupe, Martinique, St. Lucia, and St. Kitts. The introduction of the Norway rat as well as the Cane toad were the initial reasons why the mountain chicken frog experienced declines in those areas. The chytrid fungus, however has caused mass decline of the species on Montserrat and Dominica.