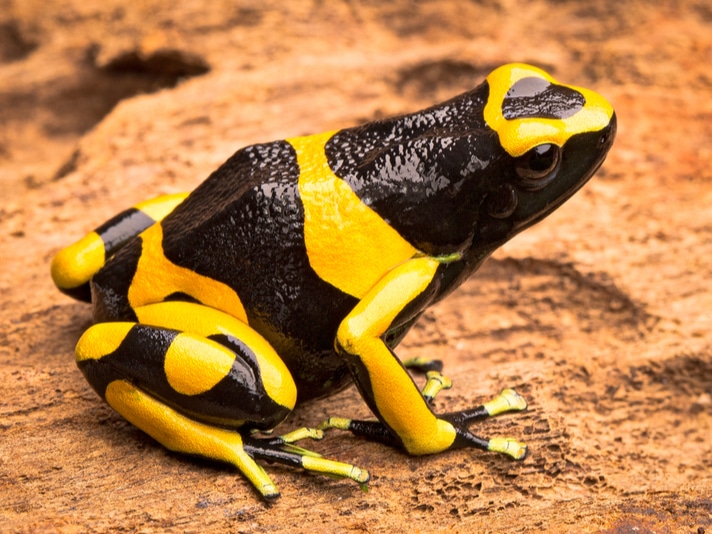 Dendrobates leucomelas is considered easy to breed, although the species will never be as fecund as many other common species of dart frogs.

Dendrobates leucomelas is considered easy to breed, although the species will never be as fecund as many other common species of dart frogs. This is most likely due to their activity patterns in the wild – a 4-5 month dry season stops breeding, which resumes with the rains. In captivity, even bumble bee dart frogs several generations removed from their wild counterparts still follow this pattern, much to the frustration of frog breeders everywhere. 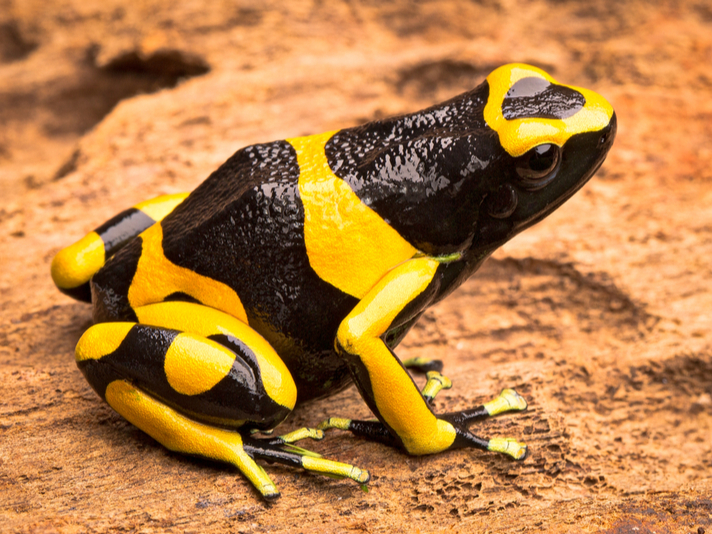 Dendrobates leucomelas is considered easy to breed, although the species will never be as fecund as many other common species of dart frogs.

Any good breeding project starts with ensuring you have a mature male and female. Since dart frogs are generally sold at 2-3 months old (when sexing is impossible) most aspiring breeders purchase 4-5 animals – virtually ensures a pair. Male leucomelas may start calling as early as 6-8 months, while females take 10-14 months to reach maturity. Don't rush them – the longer leucs have before they breed for the first time, the more energy they can devote to growth and the better breeders they will be! Expect males to be more slender and slightly shorter than females and call from high perches in the vivarium. Females will be larger and more pear-shaped, especially when gravid. Females may eat eggs, so stick to 1 female per vivarium if you are wanting to produce offspring. It can be difficult to sex leucs accurately until they're 2-3 years old.

Once a mature male and female are present in a vivarium, they often breed quickly. If they don't, do not worry! Give them time, or replicate a dry season by reducing misting and feeding for a couple weeks then gradually raise both back to normal levels. Eggs are generally laid on a smooth leaf or on a petri dish placed underneath a coconut hut. If you leave the eggs in the vivarium, after 10-14 days tadpoles will hatch out and be moved to a water source via piggyback ride from a parent.

If you're interested in producing more froglets, pull the eggs and add enough tadpole tea (distilled or reverse osmosis water with indian almond leaves soaked in it) to touch the side of the eggs, but not submerge them completely. Keep the petri dish in a deli cup and remove the tadpoles with a turkey baster after they've hatched. Tadpoles still in the egg will be curved, and newly hatched tadpoles will straighten out after a few days.

Keep the cannibalistic tadpoles individually in 32 oz deli cups with about 24 oz of tadpole tea and a bit of indian almond leaf to munch on. Feed one granule of Frog and Tadpole Bites, dusted with Sera Micron fish food, 1-2 times a week, and change half the water weekly. When kept at 75F, tadpoles will grow back legs after six weeks, show front legs at about nine weeks, then come out of the water around 10 weeks of age.

After the former froglet has all four legs out remove most of the water and tip the cup at a 45 degree angle to provide the new frog with a gentle slope to leave the water. After the tail has been absorbed keep the young bumble bee dart frog in a simple setup and feed just as you would an adult leuc. Raise the froglets for 8-10 weeks before re-homing.

Venezuelan leucomelas are the most common form of bumble bee dart frog present in the US hobby, and for good reason. These leucs are bold, do well in groups, are fairly easy to breeding, and have the trademark loud, trilling call leucs are known for. Since the early 90s, different lines and imports have been bred together by many breeders without concern of the frogs' origins. As a result, most leucomelas have hazy lineage data, if any at all. I've managed to track down a few of the early lines of leucomelas, and regularly produce animals descended from stock brought in by Ted Kahn in the early 1990s, animals from a 1995 import (sometimes called 'green foot' leucomelas, as they tend to have light green toes), and leucs from a 1996 import, which are a bit larger and more orange than many Venezuelan animals. Regardless of their origins, Venezuelan leucomelas make fantastic vivarium inhabitants. They mature at about a year in age, and lay a clutch of 3-6 eggs every 2 weeks during breeding season. Venezuelan leucs are often called 'Standard' or 'Nominat' leucomelas.

One of my favorite morphs of leucomelas, fine spots hail from Venezuela. A bit smaller than other forms of leucomelas, they are just as prolific, and have the traditional loud, trilling leucomelas call. When young, the frogs appear mostly yellow and black banded. The black bands break apart with age, eventually giving way to a yellow frog absolutely covered with small black spots. Sometimes, thin lines remain where black bands once were. Maturing a bit later than standard leucomelas, fine spots will lay a clutch of 3-6 eggs every few weeks during the breeding season. Bold after acclimated to a vivarium, fine spot leucs make a great choice to any naturalistic vivarium.

Also known as Cerro Autana leucomelas, blue foot leucomelas are by far the rarest form of bumble bee dart frog in the United States. In fact, as far as I know, I'm the only hobbyist consistently producing them at present. They are a strikingly colored animal, with light green hues overtaking the traditional yellow bands, and baby blue coloration making the toes (and sometimes the entire foot, or even leg) really stand out. These fascinating leucomelas are native to a very small area at the base of Autana Mountain in Venezuela, and are just as rare in the hobby. They can take 2-3 years to mature, and breed less frequently than any other leucomelas morph I've ever worked with. Egg clutches generally number only 2-4 eggs. Froglets morph out a bit smaller than other morphs, but quickly grow. I'm working to place groups of these animals in the hands of capable froggers in order to get this morph permanently established in the United States.

As it's name implies, British Guyana leucs descend from animals imported from British Guyana in the 2000s. Larger than the Venezuelan morphs, these leucs get more black as they age, eventually appearing as a black frog with narrow yellow bands! British Guyana bumble bee dart frogs lay large clutches of eggs, often between 8-12, and lay less frequently than standard leucomelas. They also possess a quieter call, and call rarely. Coupled with a shy, reclusive nature, British Guyana leucs may not be the best choice for a display vivarium.

Banded leucs are by far the largest morph of leucomelas I've ever worked with. Females especially can be huge, measuring in right at or around 2” in length! Clean, evenly spaced black and yellow bands make for a distinguished appearance, closely resembling the super rare and coveted Oophaga lehmanni. These leucs lay huge egg clutches – I've found one clutch with 19 eggs in it! Hailing from British Guyana, these leucs also share many behavioral characteristics with other leucs from that country. They are more on the shy side, and breed less often than leucomelas from Venezuela.

Zach Brinks has been keeping and breeding various reptiles and amphibians for over 20 years and has worked with dart frogs since 2006. Heading the animal breeding operations at Josh's Frogs, he oversees the breeding of dozens of different species of anura. With a BS in biology from Michigan State University, Zach works to produce healthy, captive-bred specimens and to reduce the demand for wild-caught animals. Frog on!