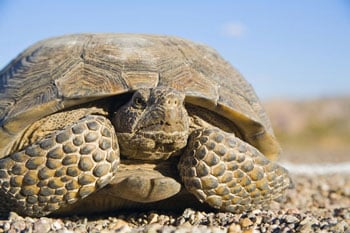 The state of Utah has received nearly $1.5 million from the U.S Fish and Wildlife Service to help acquire 1,245 acres of habitat for the desert tortoise (Gopherus agassizii), which has seen its populations decline by 90 percent since the 1950s, according to a report on KSL.com. The money was a portion of nearly $32 million that was distributed to 20 states by the service in an effort to help states to "protect the country's rarest species."

According to the report, the state's Division of Wildlife Resources will work with conservation organizations, government entities and private landowners in Washington County to bolster the habitat of the tortoises.

Utah's Division of Wildlife Resources will partner with conservation organizations, other governmental entities and private landowners to improve habitat conditions for the reserve in Washington County, the report said. The reserve is part of an agreement between the government and private landowners to develop a Habitat Conservation Plan. This plan enables the landowner to conduct lawful activities on their property even if it impacts the tortoises, but will have to create conservation measures that are designed to minimize and mitigate the impact that such actions would have on the tortoises.