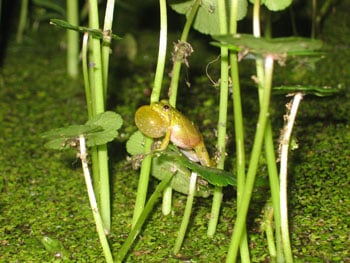 Biologist speculates development and bullying by northern cricket frog, but not the Chytrid fungus or invasive predators.

Amphibian Populations in the United States Declining at Fast Rates

"It’s a steady flow of bad news for amphibians,” Micancin said. "We don’t know yet why this is happening, but we can expect that it does not bode well for amphibians and other animals that share their habitats, including humans,” he said.

Micancin, whose family has resided in northeastern North Carolina for many generations, speculates that because of its slightly smaller size, the southern cricket frog may not be able to compete with the larger northern cricket frog. He also points to the state's growth in the last few decades with more roads, parking lots, residential developments, bigger farms and the clear cutting of pine forests as potential reasons for the frog's dwindling populations. Micancin told ReptileChannel that he does not suspect the chytrid fungus or invasive predators as contributing to the decline of the southern cricket frog.

Hear the call of the southern cricket frog in the video below:

"There are several reasons why we do not suspect chytrid or invasive species as causes of decline of A. gryllus (southern cricket frog)," Micancin said.  "Acris crepitans, a sympatric species, appears to be doing fine in many of the same wetlands where A. gryllus has vanished since the early 1960's. They are so similar physically and ecologically that it seems unlikely that chytrid or an invasive predator would affect one and not the other. Also, the decline of A. gryllus is at the northern limit of its range (North Carolina and Virginia resembles the decline of other cricket frogs at their northern range limits, A. crepitans in the Northeast and A. crepitans/A. blanchardi in the Midwest). This suggests that the causes of the decline of A. gryllus are similar to the causes of decline of other Acris species. The difference in North Carolina and Virginia, Micancin said, is that many places still have cricket frogs, just not the southern cricket frog.