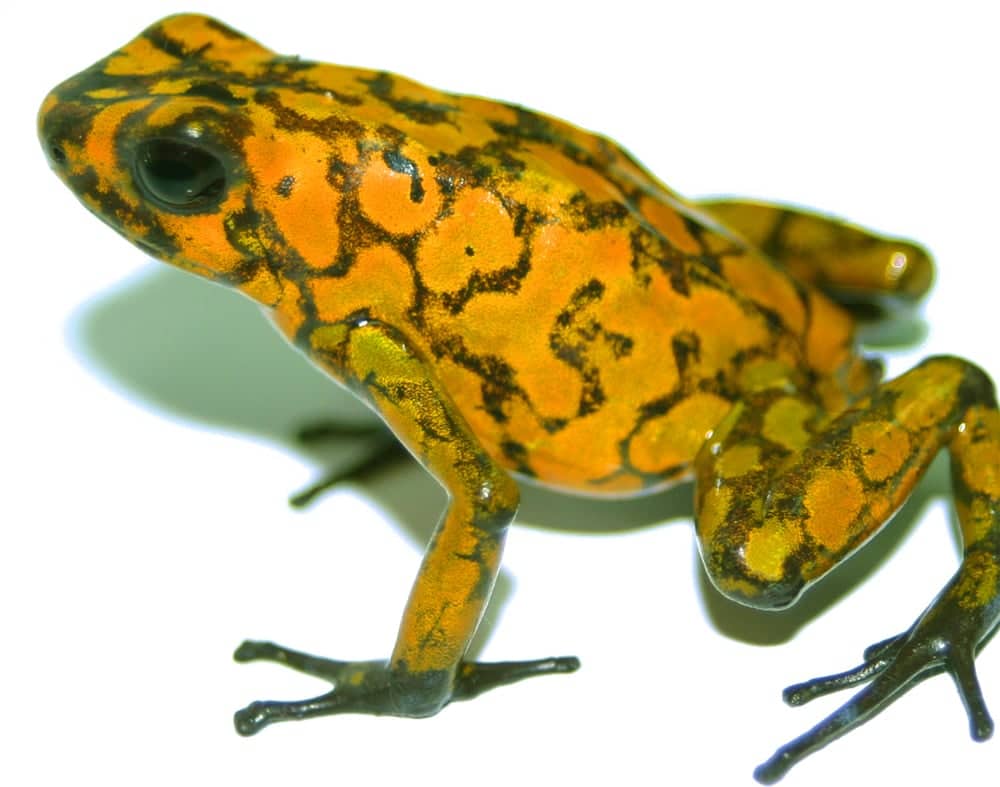 Poison frogs of the family Dendrobatidae get their poison from the leaf litter ants and mites that they eat. They aren’t born poisonous. Researchers w

The researchers, in their paper, “Land use impacts poison frog chemical defenses through changes in leaf litter ant communities,” publihsed in the journal Neotropical Biodiversity, examined an ecosystem in Ecuador that is home to the Diablito frog (Oophaga sylvatica) in both a secondary forest as well as reclaimed pasture that was used for cattle ranching 30 years ago. They examined both habitats to determine if land use impacts frog chemical defenses, diet diversity, and species diversity in the surrounding leaf litter. How diet variation changed the chemical makeup of chemical defenses in the poison frog was also examined.

The researchers determined the Diablito frog’s showed a significant difference in toxic profiles based on the habitats in which the frogs foraged for their food. Certain frogs were more poisonous than others of the same species. They also determined that the frog’s diet differed between the habitats as well as the number of ants consumed. The frogs living in the forests consumed more ants than those found in the former pastureland. The forest frogs ate more of a smaller species of ant, and the frogs in both habitats did not differ in their consumption of mites, larvae or other arthropods.

“We found that the leaf litter of forest and pasture frog habitats differed significantly in ant community structure, the researchers wrote in their paper. “We also found that forest and pasture frogs differed significantly in diet and alkaloid profiles, where forest frogs contained more of specific alkaloids and ate more ants in both number and volume. Finally, ant species composition of frog diets resembled the surrounding leaf litter, but diets were less variable. This suggests that frogs tend to consume particular ant species within each habitat.”

The researchers chemically profiled a variety of ant species within the habitat and found one alkaloid in the ants from areas that have been disturbed (such as via agriculture and cattle ranching) on the skins of pasture frogs. This is the first such instance to link “anthropogenic land use changes to dendrobatid poison frog chemical defenses through variation in leaf litter communities, which has implications for conservation management of these threatened amphibians.”

“Many open questions remain from this study that could influence future conservation efforts of poison frogs and their tropical forest habitat,” the researchers wrote in their paper. “First, it is currently unknown how forest-pasture edge effects influence O. sylvatica distribution. Amphibian species seem to vary in whether edge effects influence their spatial distributions, and future population surveys across many sites are needed to better understand poison frog distributions at the forest edge. Second, given the results presented here, long term monitoring of poison frog chemical defenses in regions with human land use is needed. Although poison frog chemical defenses are environmentally derived, their bright aposematic coloration is genetically encoded. Thus, loss of alkaloid-sources from the diet would render poison frogs undefended but still brightly colored.”

The study is not only unique in the study of the Diablito frog and its relative poison characteristics based on what and where it eats its prey, but it is also unique in that 65 high school students from two high schools in Massachusetts participated in the dietary arthropod analysis found in the research paper.

The diablito frog is a near threatened species found in Southwestern Colombia and Northwestern Ecuador. It lives in lowland and submontane rainforests and is commonly found throughout Colombia. It has disappeared throughout much of its range in Ecuador. Habitat loss and agricultural pollution have negative affected the species in Ecuador. Three color morphs (red, yellow, and orange ) have been observed in the wild on Ecuador’s Mache and Chindul coastal mountain ranges within a 3,000 hectare protected area.

The complete paper, “Land use impacts poison frog chemical defenses through changes in leaf litter ant communities” can be read in the journal Neotropical Biodiversity.