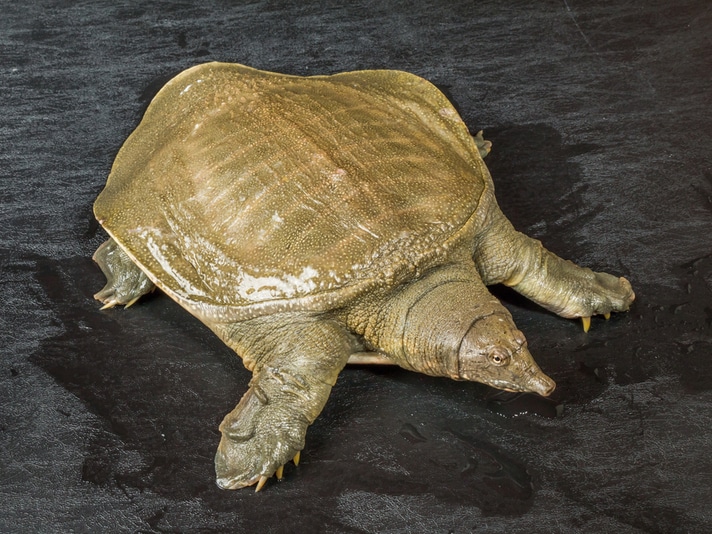 The species is nearly extinct in the wild, but is mass farmed for the food industry in China.

People frolicking on Wollaston Beach in Quincy, Mass. reported seeing a turtle digging in the sand on the beach, and officials with the New England Aquarium’s marine animal rescue team captured the turtle and determined that it was a Chinese soft-shell turtle (Pelodiscus sinensis), a reptile imported into the United States from China as a food item. This discovery is a cause of concern because the turtle is a fairly large predator that feeds on small fish, mussels, insects and clams and has the capability if it were to successfully reproduce and thrive in the area, to disrupt the ecosystem, said Nigella Hillgarth, the president and CEO of the New England Aquarium.

“If somebody is releasing them, even if it’s out of kindness, it’s misguided,” Dr. Nigella Hillgarth, president and CEO of the New England Aquarium and an expert zoologist told the Boston Herald. “I see the potential of Chinese soft-shelled turtles establishing themselves as a possibility of upsetting local eco-systems.”

Officials with the New England Aquarium speculate that the turtles were released after someone purchased them as a food item. The species is nearly extinct in the wild, but is mass farmed for the food industry in China, where it is considered a delicacy. In the wild, they are found in slow moving brackish waters and in rivers, lakes, ponds, canals and creeks. The turtle’s native range includes China, Taiwan, North Vietnam, Korea, Japan, and Russia. It is an introduced species in  Malaysia, Singapore, Thailand, Philippines, Timor, Batan Islands, and Guam. They have also been found in the Hawaiian Islands, California, Massachusetts and Virginia. One notable factoid about the Chinese soft shell turtle is it urinates through its mouth.