The Diamondback Terrapins cross runway to get to breeding grounds

Approximately 100 diamondback terrapins caused a brief shutdown of Runway 4 Left at Kennedy International Airport in New York City on the morning of June 29. The reptiles attempted to cross the runway in search of fertile breeding grounds, according to a report in the New York Times. The terrapins apparently have been crossing the runway long before the runway and airport was built, as each year the runway becomes a turtle crossing. 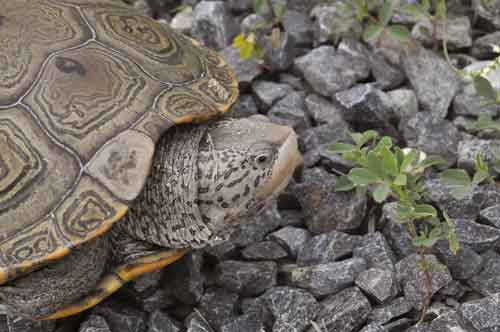 The diamondback terrapins breed in and around Jamaica Bay, in which the airport is located.

This is due primarily to the location of the airport, officials said. The airport is surrounded by water, and this time of year, the diamondbacks answer the call of nature, looking for sandy areas to lay their eggs. The New York Times reports that the diamondback terrapins breed in and around Jamaica Bay, in which the airport is located. Authorities just physically remove the shelled creatures and place them in a friendlier breeding area, away from the airport and its runways.  The story apparently went viral with someone setting up a turtle Twitter feed that has more than 8,000 followers.