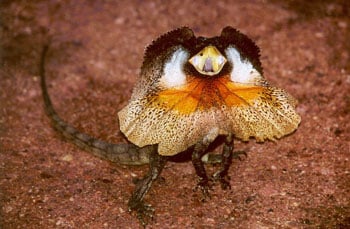 The Brighter The Frilled Lizard’s Frill, The More Likely It Wins A Battle

The brighter the frill on the frilled lizard (Chlamydosaurus kingii) , the more likely it will win a battle with a rival, according to a new study published in Behavioral Ecology. According to researchers at Australia's Macquarie University and The Australian National University, the frilled lizard's frill were previously thought to ward off predators, but the new research shows that colors of the frill may also play a role in signal fighting ability as well as mate selection.

"Surprisingly, traits such as frill size, head size and bite force did not predict contest outcome. Instead, males with brighter and more colorful frills were more likely to dominate opponents and take gold,” Biologist Dr. Martin Whiting of Macquarie University said in a press release put out by the university.

Carotenoid pigmentation (responsible for red, orange, and green colors in the frill) levels were also tested in each lizard and the researchers found a link between high levels of carotenoid pigmentation with the lizard's capability to beat a competitor when confronted. This, the researchers say is the first example of color affecting the fighting ability of a lizard.

"This is an exciting result because while carotenoids have been the source of considerable study among our feathered friends, we know little about the role of carotenoids in lizards,” Whiting said.