Burmese pythons can find their way home from as far as 36 kilometers away.

Salmon are known to return to the stream in which they were born, and sea turtles go back to their home beach as well, but Burmese pythons? According to new research published this week in Biology Letters, the invasive Burmese pythons (Python molurus bivittatus) of Florida can find their way back to their "home" range after being translocated from 21 to 36 kilometers from where they were originally captured.

According to the researchers, the translocated snakes moved straighter and faster than control snakes and displayed "movement path structure indicative of oriented movement" which essentially means that they knew which way they were going. The researchers embedded transmitters in 12 adult Burmese pythons that were captured in Everglades National Park, sending six of the snakes from 21 to 36 kilometers from their capture locations. Once released, the snakes immediately began to return in the most direct manner possible. Tracking was performed by a fixed wing aircraft using GPS data as well as walk-in tracking. Of the 12 snakes released, five of the six returned within 5 kilometers from where they were first captured. It took the snakes from 94 to 296 days to find their way home. 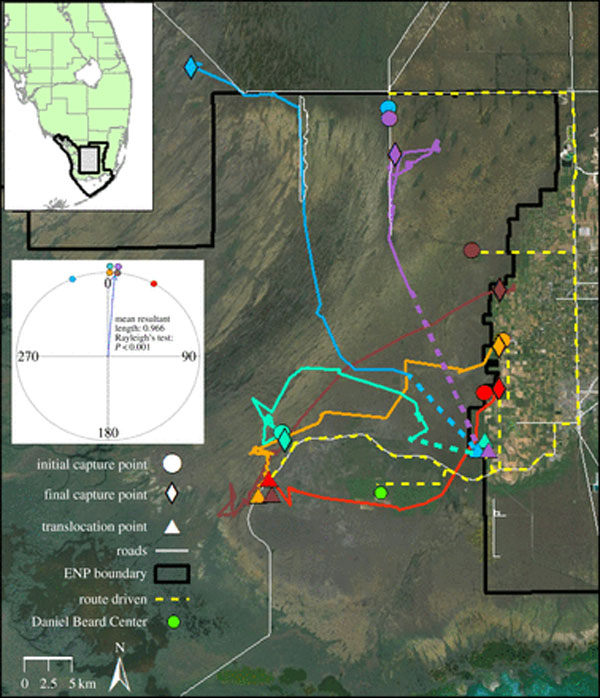 "We discovered this phenomena of homing, of a map and compass ability in the pythons that previously had not been documented in snakes but the pythons were capable of doing after we translocated them was to, in a series of movements which showed direction and purpose, they were able to. . . go back to the area where they had originally been captured," said Frank Mazzotti, a researcher with the Ft. Lauderdale Research and Education Center at the University of Florida.

The researchers say the study shows evidence of the snake's ability to find its way home after being translocated up to 36 kilometers away. They expected the snake to wander aimlessly like other snake species that are translocated similar distances but that was not the case with the python. The pythons were determined to return home where they could find food, shelter and water, Mazzotti said. The complete paper can was published Wednesday in Biology Letters.