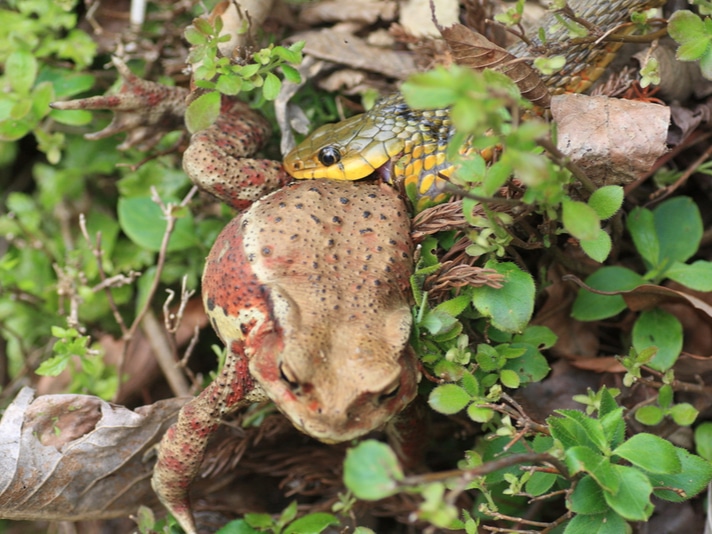 Scientists noted differences in defensive behaviors in snakes that had previously not eaten toxic toads.

The tiger keelback snake (Rhabdophis tigrinus) is a venomous (and poisonous) colubrid from Japan that gets its toxin primarily from eating toxic toads, one of its main prey items. When these snakes encounter predators, they arch their necks to display the nuchal gland area (where the toad toxin is stored) in an effort to ward them off. When predators do bite the gland area, they most likely get sprayed with toxin to their mouths or faces. 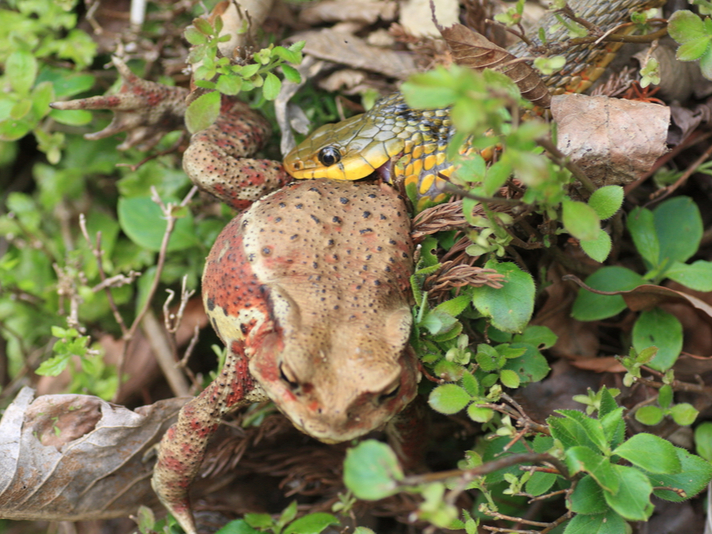 Scientists noted differences in defensive behaviors in snakes that had previously not eaten toxic toads.

But did you know that not all keelbacks display this defense? Researchers have noticed that tiger keelback snakes on a Japanese island that does not have toads would rather flee than stand their ground when faced with predators, according to a paper published in the Journal of Comparative Psychology.

The researchers believe that, based on their defensive behaviors, the snakes that have toxins in their nuchal glands know they are carrying the toxins, while those snakes that don’t have the toxins know it as well and respond accordingly.

So Kyoto University’s Akira Mori, and Gordon Burghardt of the University of Tennessee in Knoxville captive bred hatchling tiger keelback snakes from a toad-free island in Japan as well as an island in Japan with significant toad populations. They fed the snakes that hailed from the toad-free island toads and found that when threatened, they would display their nuchal glands and stand their ground rather than crawl away.

“So far as I know, this is the only example in terrestrial vertebrates where there is some indication that animals act as if they are aware of when they are toxic and when they are not,” Burghardt told the New Scientist.

How the snakes know they are carrying toxins is the $64,000 question. Could the snake monitor the level of toxin in their glands or detect the microbes living in their digestive system? It seems only the snake could know.

An abstract of the paper, “Do tiger keelback snakes (Rhabdophis tigrinus) recognize how toxic they are?” is available on the APA PsycNet webpage.