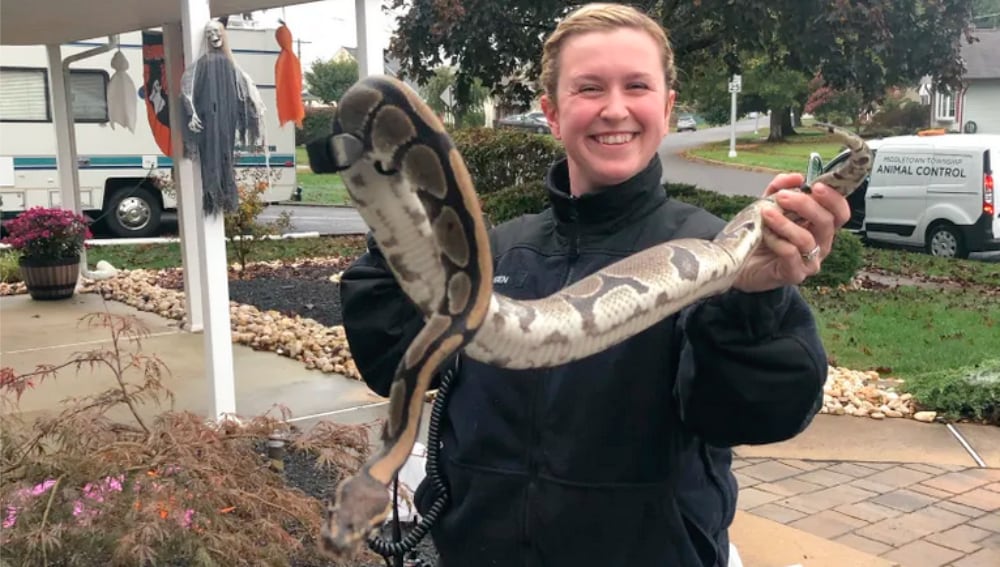 Police in Middletown Township, PA were called to a residence in Levittown after a four foot long ball python was found in a man's garage. And after po

Police in Middletown Township, PA were called to a residence in Levittown after a four foot long ball python was found in a man’s garage. And after police took possession of this ball python, two more were found nearby in a parking lot. Cheyenne Keen, animal control officer for Middletown Township police took control of all three snakes, and one died at the Bucks County SPCA.

“Four-foot pythons don’t just go missing without somebody noticing,” Cheyenne Keen, animal control officer for Middletown Township police told KYW News Radio. “So, we do believe that somebody either released the animals or dropped them off in a parking lot. We’re unsure of who at this point.”

Keen told KYW News Radio that abandoning snakes in these trying times is not the answer.

“If somebody’s in a situation where they can’t care for their pets or they feel like they’re backed into a corner, please, please, please reach out to animal control or your local shelter or SPCA,” she urged.

“They’re one of the most commonly owned snakes. They’re super docile and they make great pets,” Keen told WPVI.

Middletown Animal Control told WPVI that pet assistance requests have increased since the pandemic, and says surrounding an animal is always better than abandoning, and it is not illegal to surrender.

“We will not judge. We will ask some questions to ascertain the health and background of the animal. We’re just here to assist people and their pets,” Cindy Kelly with Bucks County SPCA told WPVI.

The two surviving snakes, both females, will most likely be sent to a reptile rescue for adoption.

Ball pythons are one of the most popular snakes in the hobby and come from western Africa. They are widely captive bred throughout the United States. They grow to about five feet in length and can live for 30 years or more. If you keep a ball python, or any snake, please ensure that its enclosure is escape-proof.