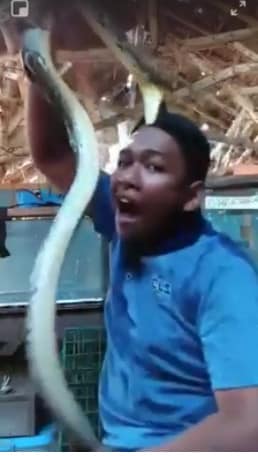 This Is Why You Shouldn't Taunt A Snake

The snake gets his revenge for being mistreated.

Man Rolls Down Car Window To Save Squirrel Tree Frog From Certain Death
Indonesian Pop Star Irma Bule Dies After King Cobra Used as Stage Prop Bites Her
More Than Half The World’s Amphibians In Danger Of Extinction, Study Says

There is a video going around social media showing a man taunting a reticulated python (Python reticulatus). The man continuously blows in the python's face, and the python tries to strike at the man who is harassing him.

The video ends with no obvious conclusion, but the comments on the Reptile Hunter Facebook page are unforgiving toward the man who taunted the reptile.

Said Joshua Willems: Sad part is such a beautiful snake.. probably lost teeth or worse… because some a#$hole again used an animal for entertainment. Good on the retic for fighting back!

Said Chris Woodard: Serves him right, he should be treating them with respect. I hope it hurt and he learnt a lesson.
Said: Mark Curry Little a hole deserves all that! 😡🤬

It is not clear where the video was shot, but most likely somewhere in Southeast Asia, where the metic is native. Hopefully this snake is ok and the guy who harassed the animal learned his lesson and learns to treat these animals with respect.