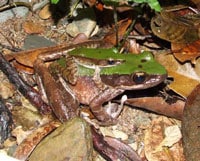 The Risk Of Deadly Fungal Disease With Asian Amphibians Assessed

An international team of researchers has completed the first major survey in Asia of a deadly fungus that has wiped out more than 200 species of amphibians worldwide. The massive survey could help scientists zero in on why the fungus has been unusually devastating in many parts of the globe – and yet why Asian amphibians have so far been spared the same catastrophic population declines. 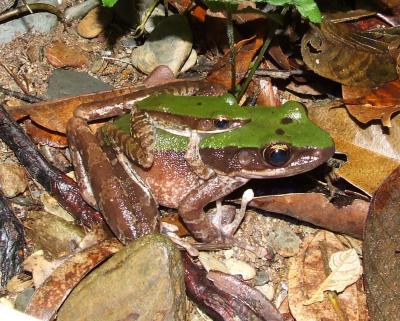 A pair of Odorrana chloronota frogs in Laos, where a survey conducted by Vance Vredenburg and colleagues found that the chytrid fungus is present in this species.

The disease chytridiomycosis, caused by the fungus Batrachochytrium dendrobatidis (Bd), is responsible for numerous amphibian extinctions in Central, South and North America, Australia and Europe. The new Asian survey has revealed that Bd is prevalent at very low levels in the region.

Asia is home to a highly diverse set of amphibian species, and potentially could be vulnerable to Bd. But Vance Vredenburg, assistant professor of biology at San Francisco State University, said very little is known about the fungus and its impact on the health of amphibians in Asia. "That's why we're excited about this first really big survey," said Vredenburg, who led the research team. "If you look at chytrid worldwide, Asia's been the black hole in our data."

From 2001 to 2009, Vredenburg and his colleagues surveyed more than 3,000 amphibians – mostly frogs – from 15 Asian countries, swabbing the toe webbing, thigh and abdomen of the animals to pick up any signs of Bd, which infects the skin of amphibians.

The team found that the prevalence of Bd was very low throughout the region, appearing in only 2.35 percent of the frogs. The Philippines, Kyrgyzstan, Laos, Indonesia, Malaysia and South Korea were the only countries with any Bd infection.

The survey suggests that Bd is either emerging in Asia, or may have been in Asia at low levels for a long time or that some other factor is preventing Bd from having such a major impact here, compared with its effects elsewhere.

Questions still to be answered

Each site in the study was only surveyed once, Vredenburg explained, so it's difficult to determine whether Bd infections in the countries are newly expanding. It will be critical, he said, "to see how Bd prevalence is changing through time, because this is key to understanding the ultimate outcome of the disease."

If Bd has been in Asia for a long time, researchers would like to know why amphibians there have managed to co-exist with a fungus that has proved so destructive elsewhere. It is possible, for instance, that Asian amphibians might bear some sort of bacterial protection against Bd in their skins.

Other scientists are analyzing the genes of the Bd fungus collected globally, Vredenburg explained, so as "to find out whether strains from different parts of the world also differ in their virulence."

He added that the possibility of another wave of extinctions highlights the need to follow the Asian survey with further research to answer all of these questions. "This study is the first important step to understanding Bd in Asia. It provides a solid foundation that future studies can build upon."

If Asia is on the brink of a chytrid epidemic, Vredenburg and colleagues think it might start in the Philippines. "The prevalence and intensity of Bd infection is much higher there than anywhere else in Asia," he said. "Bd in the Philippines today looks similar to Bd in early outbreaks in California and South and Central America."