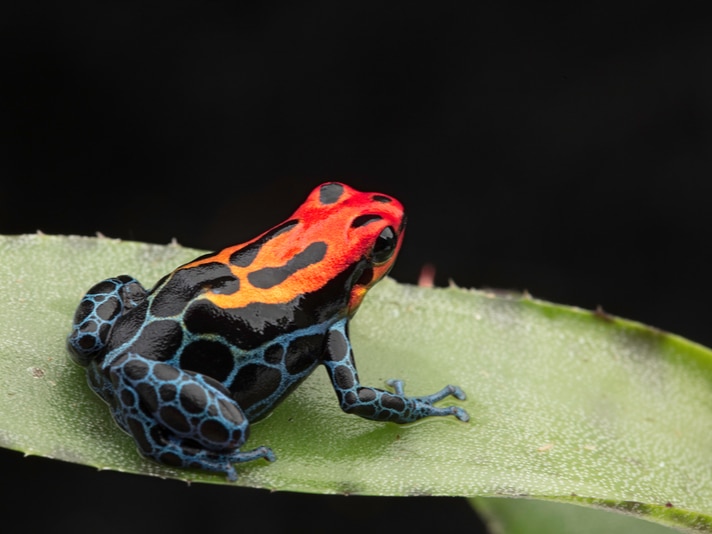 Poison Dart Frogs May Have Higher Extinction Rates Than Other Frogs

Animals that use other defenses such as mimicry, camouflage and warning coloration tend to evolve more efficiently.

Dart frogs have a lot of things going for them. They are bright and pretty, live in beautiful rainforests, and are poisonous. But did you know that their poison could also be the cause of their downfall?

Researchers with the University of Liverpool published a study in the Proceedings of the National Academy of Sciences that says that while dart frogs use toxins to protect themselves against predators, those toxins are the reason the frogs are at a higher risk of extinction. Animals that use other defenses such as mimicry, camouflage and warning coloration tend to evolve more efficiently.

They found that those amphibians that used warning coloration and mimicry had higher rates of speciation but the rates of extinction remained unchanged.

"There are a number of plausible reasons why the use of chemical defense might lead to higher extinction rates, Dr. Kevin Arbuckle, lead author of the study said in a statement. “For example, it could be that there is trade off which leaves prey vulnerable to other kinds of enemies, such as infectious diseases, but we don't yet understand what drives the relationship."

Their study showed that a long held evolutionary hypothesis called escape-and-radiate, in which an animal’s defenses let prey “escape” from predators and diversify into other species, needs to be reassessed to take into account the effects of extinction rates on these animals.

“We propose that 'escape-and-radiate' should be seen as just one part of a more general hypothesis for the macroevolutionary effects of antipredator defence that includes both speciation and extinction."

"In addition, our findings could help support the conservation of endangered species by allowing some predictability of extinction risk from knowledge of antipredator defences. Amphibians are a key example of this as they have suffered population declines worldwide, including many of the iconic poison-dart frogs."

An abstract of the paper, Antipredator defenses predict diversification rates, can be read on the PNAS Journal website.