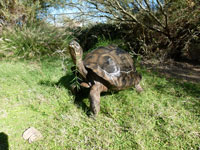 Galapagos tortoises (Chelonoidis nigra) are classified as an Endangered Species by the United States Fish & Wildlife Service (USFWS). Their IUCN classifications range from "extinct in the wild" to "vulnerable," and they are listed on Appendix I of the Convention on International Trade in Endangered Species (CITES).

In the 16th century, there were more than 250,000 tortoises. This number declined to a low of 3,000 to 6,000 in the 1970s. Currently, it is estimated that there are more than 19,000 Galapagos tortoises. The rebound in the number of Galapagos tortoises over the past 40 years is due to several conservation factors, including efforts to eliminate feral mammals (pigs, dogs, cats, rats, goats, donkeys and cattle), banning of their exportation in 1970, the establishment of breeding centers, and the reintroduction of head-started captive-bred tortoises back on their native islands. 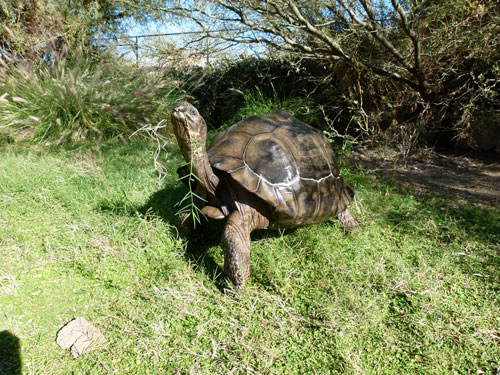 It is estimated that there are more than 19,000 Galapagos tortoises.

The Galapagos tortoise is a flagship species for conservation efforts throughout the Galapagos Islands. In 1965, breeding-and-release programs began. Eggs were collected from nesting sites and hatchlings raised at breeding centers for several years until they were large enough to survive in the wild. The Hood Island tortoise (C. n. hoodensis) is perhaps the best example of captive breeding. In 1971, the 14 (two males and 12 females) remaining wild tortoises on Hood Island were brought to the Charles Darwin Research Station for captive breeding. With only two males, there was not much genetic diversity, but this was enhanced in 1978, when the San Diego Zoo identified a tortoise in their collection as a Hood Island specimen and returned it to the Charles Darwin Station. This group of 15 tortoises has now produced more than 2,000 hatchlings, which have been release to their home island, some of which are now grown and reproducing naturally in the wild.

There is even hope for Lonesome George, the only surviving Pinta Island tortoise (C.n.abingdoni). Isabela Island females (C.n. becki) in his enclosure have laid eggs. Unfortunately, thus far, all have proved infertile. Artificial insemination of a closely related female and even cloning have been considered. In 2011, Lonesome George was placed with two Hood Island females (C. n. hoodensis), which are considered a better genetic match than the Isabela Island females, which where geographically the closest species to Pinta Island. Recently, hybrid Pinta Island tortoises have been identified, and it is hoped that Pinta Island may eventually be restored with specimens possessing the approximate genetic makeup of the original island inhabitants. In preparation of possible reintroduction of tortoises to Pinta Island in May 2010, 39 adult sterilized tortoises were released on Pinta Island to help restore the island ecosystems. The giant tortoises are a keystone species, helping with seed dispersal, trampling down brush and thinning vegetation. Sterile tortoises were released so that the problem of interbreeding between subspecies would be avoided if fertile tortoises are released in the future.

There may also be hope for the extinct Floreana Island species. Recent DNA analysis has identified living descendents of the tortoise (C. n. elephantopus), once endemic to Floreana Island, on the neighboring island of Isabela. Nine hybrid tortoises (six females and three males) exhibit strong Floreana ancestry based on comparison to DNA analysis of Floreana museum specimens. These tortoises are all at the breeding facility on Santa Cruz Island and will be the founder stock for selective breeding to resurrect the extinct Floreana species.

Introduced mammals, natural disasters, poaching and habitat destruction are still threats in the wild, but conservation efforts and captive breeding make for a promising future for Galapagos tortoises. While their status in the wild is much more promising than it was in the 1970s, there is much more to accomplish and conservation efforts must continue.

Galapagos Tortoises in the United States

Galapagos tortoises are well-represented in zoos across the United States. The number of zoos that have successfully bred them include the San Diego Zoo; the Gladys Porter Zoo in Brownsville, Texas; the Phoenix Zoo and a few others. Unfortunately, many of the tortoises in zoos are quite old, some collected by the Townsend Expedition in the 1920s. Many institutions that were once breeding their tortoises have stopped breeding efforts or are no longer having success. In 2010, at the Association of Zoos and Aquariums Taxon Advisory Group (AZATAG) meeting in San Diego, several zoo representatives, the Turtle and Tortoise Preservation Group (TTPG), and private sector breeders met informally to discuss the current status of Galapagos tortoises in the United States.

Based on the group's discussion, it was determined that breeding efforts should be encouraged by individuals and institutions that maintain Galapagos tortoises. If breeding efforts are not instituted, this species will disappear from the United States as current specimens age and die. In addition, raising hatchlings has been problematic. Even if tortoises are not pure genetic stock, the knowledge gained from raising the hatchlings is critical to the future of this species in captive collections. Representatives from the San Diego Zoo, Gladys Porter Zoo and Phoenix Zoo, plus private breeders, are working together to conduct DNA testing on all Galapagos tortoises in the U.S., and they are renewing efforts to breed these magnificent tortoises. In 2011, the author and the Gladys Porter Zoo were both successful in breeding and hatching Galapagos tortoises. A zoo in South Carolina also, unexpectedly, had baby Galapagos tortoises hatch naturally out of the ground in their tortoise pens. These breeding successes will hopefully ensure that Galapagos tortoises are available for future generations to see, without requiring a trip to the Galapagos Islands.