A new study led by scientists at the University of Maryland Center for Environmental Science has identified high traffic areas of the Pacific leatherback turtle (Dermochelys coriacea) in the Pacific Ocean that are also potential danger zones.

The study, "Identification of distinct movement patterns in Pacific leatherback turtle populations influenced by ocean conditions," and published in the March 2012 issue of Ecological Applications, shows that Pacific leatherback turtles can be found throughout the Pacific Ocean in two distinct populations found in the eastern and western Pacific, and the tracking of their movements could help to change fishing practices to reduce their mortality caused by commercial fishing. 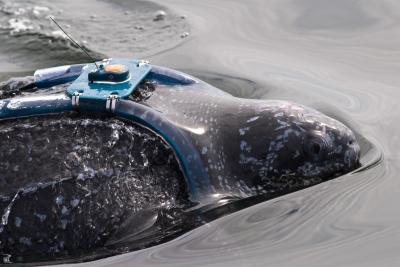 The scientists used high tech satellite tracking devices to track 135 turtles and combined the tracking data with oceanographic satellite data from NOAA, NASA, and international partner space agencies to get a clear picture of the long distance migration patterns of the largest sea turtle in the world. Scientists tagged the eastern Pacific population at their nesting sites in Costa Rica and Mexico while the western Pacific leatherback turtles in the study were tagged at feeding grounds off the coast of California and at two nesting sites in Indonesia.

"The study shows that leatherbacks can be found throughout the Pacific Ocean and identifies high-use areas that are of particular importance to their survival," Dr. Helen Bailey of the University of Maryland Center for Environmental Science and lead author of the study said in a prepared statement. "This information on their movements is essential for identifying hot spots and assessing where limiting fishing at particular times of year may be effective for protecting leatherbacks."

The study determined that the western Pacific population nested in Indonesia and swam to sites in the South China Sea, Indonesian seas, southeastern Australia and as far east as the West Coast of the United States to feed on jellyfish. This wide ranging migration enhances the chances these chelonians could unintentionally be captured in fishing gear during their migration, the study said.

The eastern Pacific population traveled from Mexico and Costa Rica south and fed offshore in areas of upwelling, whereby winds bring colder, more nutrient rich waters to the surface. This limited migration, the scientists pointed out in their study, could leave the population vulnerable to any climactic or man made changes that could affect the jellyfish populations in the area.

The Pacific leatherback turtle is the largest sea turtle species, grows to more than six feet in length, and can weigh more than 2,000 pounds. Rather than a bony shell, the carapace of the leatherback is covered in a thick leathery skin. Dermochelys coriacea also travels the furthest than any other sea turtle to feed, primarily on jellyfish. A factor of leatherback sea turtle mortality can be attributed to commercial fishing, with scientists saying that the leatherback turtle populations in the eastern Pacific has dropped by more than 90 percent in the last 32 years.