Softshell turtles are one of the most widespread varieties of turtle in the world.

Softshell turtles are one of the most widespread varieties of turtle in the world. Within the family Trionchidae, there are more than a dozen recogniz

Softshell turtles are one of the most widespread varieties of turtle in the world. Within the family Trionchidae, there are more than a dozen recognized genera and upward of three dozen species. Extant species occur in Africa, Asia, the Indonesian Archipelago and North America. The fossil record indicates that softshells once occurred in Europe and South America, as well. 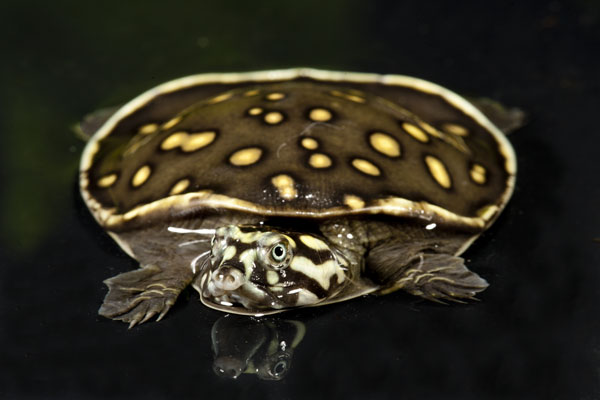 Certain soft-shelled turtles have leathery lobes on their underside which can close up to protect their hind legs. These turtles are called “flapshells.” This is an Indian flapshell (Lissemys punctata).

The generic softshell body plan starts with a flattened profile, reduced ossification (i.e., bony structure) and leathery skin covering the shell. The head is typically tapered, with a snorkel-like proboscis, and fleshy lips concealing the jaws. Within this basic body form, softshells come in myriad sizes, shapes and colors. Some are absolutely gigantic, reaching up to 4 feet in length, while others are relatively small, reaching sexual maturity at a mere 6 inches in length. Certain species have leathery lobes on their underside which can close up to protect the turtle’s hind legs, earning them the name “flapshells.”  And across the family can be found all the colors of the spectrum, from the deepest black to the brightest blue, the richest red to the purest white. 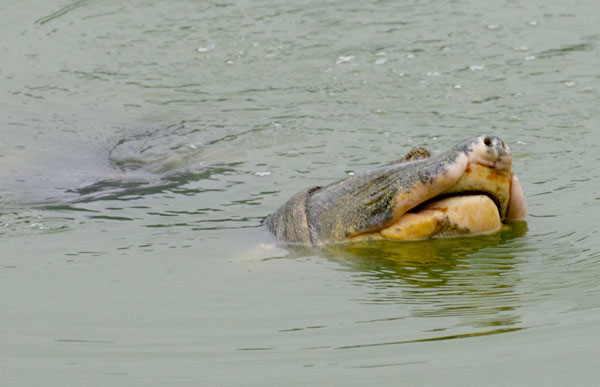 The elusive Yangtze giant softshell turtle (Rafetus swinhoei) is teetering on the brink of extinction, with less than a half-dozen confirmed specimens known. This is the Hoan Kiem Turtle in Hanoi, Vietnam.

In this short article, I’m going to briefly describe some of the more exotic, non-U.S. softshells.

The Asian narrow-headed softshell turtle (Chitra chitra) is truly a giant, and possibly the largest living species of softshell turtle in the world. Reaching a monstrous 48 inches in length, this behemoth spends most of its life buried just below the sand at the bottom of slow-moving streams and rivers across Southeast Asia, with only its eyes and nostrils visible from above. It ambushes its prey with a lightning-fast strike of its gaping mouth. 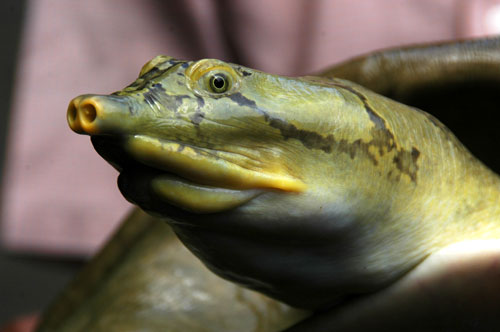 The diminutive Malayan softshell (Dogania subplana) is small by softshell standards, with a maximum size of only about 10 inches. It possesses striking coloration in the form of a bright red blotch on the side of the head that often extends down to the throat and back along the underside of the neck. It lives in swiftly flowing mountain streams and shows a marked preference for cold water. It also has a relatively short neck in comparison to other softshells, but still seems able to bite the hand that holds it from nearly any angle!

Perhaps the rarest turtle on the planet, the Yangtze giant softshell turtle (Rafetus swinhoei) is also one of the largest softshell species at more than 3 feet in length. There are currently less than a half-dozen living specimens known to exist. Two of these turtles are in Suzhou Zoo in China, and a desperate effort  to breed them, spearheaded by the Turtle Survival Alliance (www.turtlesurvival.org), is possibly the last hope of survival for this species. One of the other known specimens is the fabled Hoan Kiem Turtle in Hanoi, Vietnam.

Possibly the most bizarre looking softshell is Aubry’s flapshell turtle (Cycloderma aubryi). This species is very attractively colored with red, brown and black. But besides possessing a movable flap of thick, leathery skin at the opening of each hind limb, this turtle has unique labial flaps on the its face.

The Ganges softshell turtle (Aspideretes gangeticus) represents some of the most strikingly colorful softshell species. With its black-striped turquoise head, the Ganges softshell is a member of a group sometimes referred to as “peacock softshells” because of the four bold ocelli on their carapaces. Although it’s not entirely clear what purpose these ocelli serve, they certainly enhance the beauty of these captivating turtles.