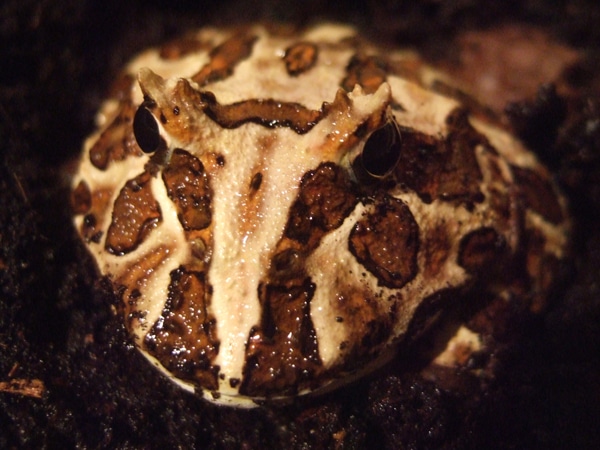 Though it’s been more than 40 years, I can still recall my first experience with the Argentine Horned frog. It was the late 1970s and I walked into my favorite Cape Cod pet store to see what was new and exciting. Among the glass tanks filled with Hellbenders, snapping turtles and rosy boas to name a few, I saw staring at me from beneath a dampened mound of bark mulch two small, beady eyes and a patch of brownish colored skin. Upon closer inspection and still trying to figure out exactly what it was I was looking at, I was startled to the point of jumping when at that moment from within this small tank, a burst of energy like a mini atomic bomb sent the occupant hurling toward the glass right toward my face! 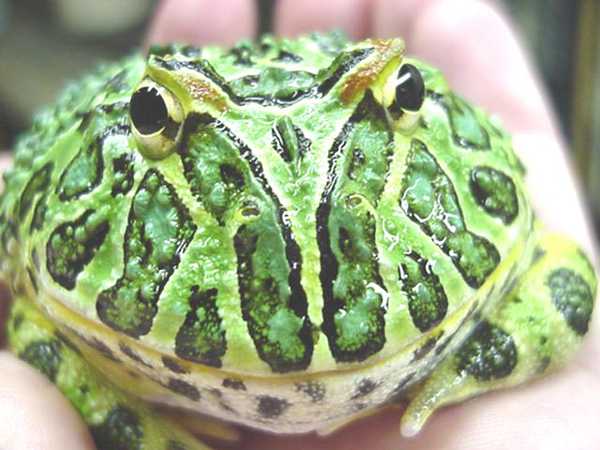 In a moment’s time and as quickly as it had sprung forward, this weird little organism had retreated back to its original resting place. I knew at that moment I needed to have this peculiar little creature!  I can remember the shop keeper telling me, “the frog in that tank is called a Horned frog (Horned frogs hadn’t received the nick name “Pac Man” as the video game from which the name is derived hadn’t even been in existence yet) and it will attack and eat anything that moves in front of its face!” This information as rudimentary as it may have been, turned out to be quite spot on.

The Argentine horned frogs as the name would imply come from the moist grasslands of Argentina in South America where they spend the majority of their lives with two thirds of their bodies buried in the soft, damp earth. Horned frogs are ambush predators and they are very well camouflaged within their surroundings, surprising virtually any organism that happens before them. Although there are a number of different species of Horned frogs available to the pet industry, all belonging to the genus Ceratophrys and including C. cranwelli, C. cornuta, C. testudo, C. stolzmanni, C. joazeirensis, C. calcarata and C. aurita, in this article I will concentrate primarily on the most familiar species of Ceratophrys, the Argentine horned frog Ceratophrys ornata or “Pac Man” frog as it is known.

First described in 1824 by German naturalist Alexander Maximilian, the Argentine horned frog is a compact species rarely reaching the size of six inches in females and roughly four inches for males, they are an animal with a mouth that extends back nearly one third the length of the body giving them the appearance of being nothing more than a head with legs attached at the back. Their color can typically contain reddish brown, yellow, black, white and green and in any combination naturally forming a “classic military” camouflage look. Aside from producing beautiful albino specimens of Argentine horned frogs, many private breeders have gone to great lengths to isolate and define specific colors and patterns through selective breeding and in turn have produced some truly amazing works of living art!

The upper eyelids of the Argentine horned frog's eyes form a fleshy projection which make up the horned frog's “horns.” Some species of horned frogs such as C. cornuta have a more pronounced “horn” than others, making them more desirable to some keepers.

Horned frogs are very strong animals with extremely powerful jaws that are designed to hold onto animals nearly as large as themselves. The jaws are lined with tiny tooth like projections which aid in gripping struggling prey. The cavernous mouth is designed to contain animals such as a multitude of invertebrates, reptiles including snakes, small mammals and amphibians which sometimes include their own species.

Handling: Argentine horned frogs do not particularly do well with handling and can become quite stressed when handling is done frequently. If you feel like you need to handle your Argentine horned frogs, be sure to wash your hands thoroughly to avoid passing along unwanted germs. Handle your frog with moistened, cupped hands. Creating a cup around your frog will reduce the likelihood of your frog being able to lunge free from your grasp and ending up on the floor which can prove fatal. Be careful when reaching for your frog! Argentine horned frogs, though not aggressive, still have a tremendous feeding reflex and an adult frog can do quite a bit of damage to your sensitive fingers! 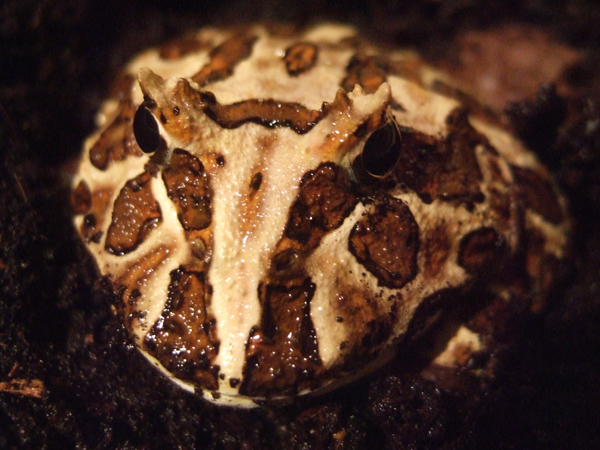 The horned frog is a favorite among amphibian keepers primarily due to their small size and compact stature, their lack of interest in occupying a large space and their voracious appetites. Where space is an issue, the Argentine horned frog is a perfect herp representative. It requires an area not much larger than a five gallon tank and many keepers find it easier to simply keep them in small translucent plastic tubs the likes of which can be kept in a shelving system. Regardless of the type of captive environment that you provide for your frogs, be sure to keep the containers covered to prevent possible escapes and unwanted visitors.

Argentina is an area of South America with complex weather patterns and contrasting micro climates. Summers can be quite warm and rainy with winters being cooler and often very dry. I keep my horned frogs successfully at temperatures of about 75-80 degrees Fahrenheit, with a slightly cooler dry period throughout the winter of about 70 degrees Fahrenheit.

The horned frog’s captive environment is a simple one, requiring nothing more than a frog and a soft, dampened substrate in which the frog can burrow.

A few substrate options for the Argentine horned frog enclosure can consist of moist peat moss, ground pine bark mulch or even clean soil. Care should be taken to keep the substrate damp but not wet, too much water can lead to bacterial issues which in turn will lead to distress and illness. The author keeps his frogs in dampened soil or pine bark mulch allowing the soil to become quite dry before remoistening it. Pine bark mulch and soil both dry out from above, working downwards and when the top of the soil becomes completely dry, it is time to water it again. Argentine horned frogs seem to appreciate a light daily misting with a spray bottle early in the morning or late in the evening.

It is extremely important to keep your frog’s enclosure clean, by changing the substrate twice a month you will greatly reduce the chance of bacterial issues related to ammonia and fecal buildup.

Horned frogs can be fed frequent smaller meals such as soft bodied insects and worms or less frequently, vertebrate food items such as appropriately sized mice. Remember, just because your frog has the capacity to swallow larger food items, doesn’t mean it has to! Horned frogs are very inactive, often relocating to another location only after defecating in their former spot and will become obese on a steady diet of large, fattening mice. A variety of invertebrate food items several times a week is always best and when feeding mammals feed only once a week. It is very important to keep your frogs one frog to a container or at least keep them together at similar sizes. It is very common for larger horned frogs to swallow smaller enclosure companions!

Some keepers prefer to leave a shallow body of water in the enclosure with their frogs, I do not. Argentine horned frogs receive most of their moisture needs via perfusion through the soft tissues of their belly and cloaca and will often “drink” when the tank is saturated after a period of drying out. Soaking your horned frog in warm, shallow water once a week is a good practice as well. If you do use a water bowl for your frogs, be sure to keep it SHALLOW! A deep bowl will not only be difficult for your frog to climb into but will also be a possible cause of its death if it cannot get back out. Letting water stand open for a couple of hours before using it on your frogs will help reduce chlorine levels and will be less stressful to your frogs sensitive skin.

Argentine horned frogs breed fairly well in captivity especially when a simple yet specific conditioning routine is followed. Just ahead of the winter months, be certain that your well-fed and hydrated Argentine horned frog have had a week or two to fully digest and pass along any solid waste.

Gradually reduce the temperatures by 5 to 10 degrees (this can often be achieved by simply moving the horned frog enclosure closer to the floor) in the enclosure that your frogs are being kept and completely stop feeding and watering your frogs. As the substrate in you Argentine horned frog's environment becomes increasingly dry, your frogs will burrow deeper and begin to develop a dry sac over its body. When the substrate is completely dry, the frog is dry, membrane sac will prevent water loss from the frog to the surrounding substrate. Leave your frogs undisturbed now for two to three months.

After this brief aestivation, (I say aestivation because dormancy in this case is triggered primarily by a drying out of the substrate) begin gradually moistening the substrate once again until it is thoroughly and evenly moistened. Your frogs will emerge feeling refreshed and will consume their moisture retention membrane. Begin feeding your frogs again while maintaining a routine of heavy misting several times a day in your frog's enclosure. After a few days of heavy misting, your frogs should be moved into a rain chamber where your male will begin courting your female frogs. Due to space requirements here I will not go into construction details of the rain chamber but they can be built with relative ease following available instructions online and often utilizing a plastic tub filled with shallow water (Horned frogs are not strong swimmers), a few artificial plants which eggs can be attached to, a source of heat to maintain a steady water temperature and a landing area such as a smooth stone to accommodate tired frogs!

Males develop a darkened area beneath the throat when mature and call to females using a peculiar low toned clinking sound which almost sounds like turning a rusty bolt within a rusty nut for a lack of a better description!

Once placed into a rain chamber, conditioned males will mount receptive females in an embrace known as amplexus and this may last several days until females deposit eggs to be fertilized by the male’s own genetic material.

Once eggs have been laid and fertilized, adult frogs should be removed from the rain chamber and returned to their regular captive environments.

Water should be added to the existing rain chamber tub containing eggs and fertilized eggs should be ready to hatch in four to seven days. Tadpoles can be maintained on flaked fish food and algae. Once tadpoles have matured into actual froglets, each froglet will need to be housed separately to avoid cannibalism.

Keeping Argentine horned frogs can be a rewarding experience for any herp enthusiast but just remember, you get out of it what you put into it. A clean and healthy frog is a happy frog and happy frogs have happy owners!

Loading...
Newer Post
Sacred Turtle Of Vietnam Has Died
Older Post
One Of Alan Rickman’s Last Acting Gigs Was A PSA With A Tortoise To Help Refugees
Advertisement