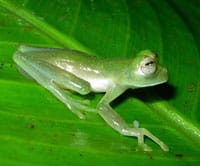 Scientists have announced the discovery of 10 amphibians in Colombia believed to be new to science.

Scientists have announced the discovery of 10 amphibians believed to be new to science, including a spiky-skinned, orange-legged rain frog, three poison dart frogs and three glass frogs. 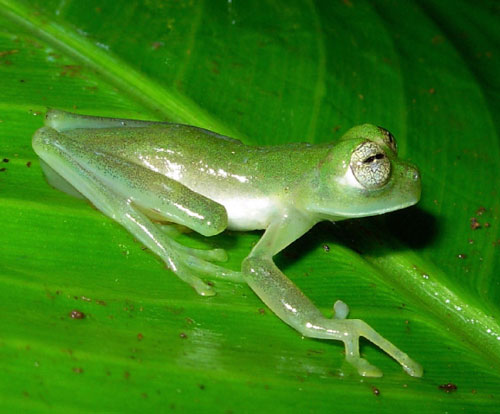 A glass frog of the Nymphargus genus potentially new to science discovered in the mountains of the Darien in Colombia.

The species were discovered during a Rapid Assessment Program (RAP) expedition in Colombia’s mountainous Tacarcuna area of the Darien, near the border with Panama. The expedition was led by herpetologists from Conservation International (CI) in Colombia and ornithologists from the Ecotrópico Foundation, with the support of the local Emberá community of Eyakera.

Over a period of three weeks, the scientists identified approximately 60 species of amphibians, 20 reptiles and almost 120 species of birds, many of them apparently found no where else.

The potentially new species of amphibians include three glass frogs of the Nymphargus, Cochranella and Centrolene genus; three poison dart frogs of the Dendrobatidae family (Colostethus, Ranitomeya and Anomaloglossus genera), one harlequin frog of the Atelopus genus, two species of rain frogs of the Pristimantis genera and one salamander of the Bolitoglossa genus. Colombia holds one of the most diverse amphibian communities in the world, with 754 species currently recorded.

Other surprising findings included the presence of Central American species recorded for the first time in the northern area of South America, including a salamander (Bolitoglossa tayloriI), a rain frog (Pristimantis pirrensis), a small lizard (Ptychoglossus myersi) and a snake not yet identified.

“Without a doubt this region is a true Noah’s Ark. The high number of new amphibian species found is a sign of hope, even with the serious threat of extinction that this animal group faces in many other regions of the country and the world,” said Jose Vicente Rodriguez-Mahecha, Scientific Director of CI-Colombia.

Although the natural cover of the Darien region is currently relatively undisturbed, it faces many threats and is undergoing rapid landscape transformation, mainly due to selective wood extraction, extensive cattle ranching, illicit crop cultivation, hunting, mining and habitat fragmentation. Between 25 and 30 percent of the natural vegetation of the area is being deforested, especially in the lowlands and alluvial plains.

Results of the expedition are expected to contribute to strengthening the protected area status that applies to almost all the Colombian Darien region, and to help bring about the declaration of a new protected area in the Tacarcuna hills. In addition, an important goal is to support initiatives that guarantee the land rights for the indigenous Emberá community of Eyakera through the creation of an Indigenous Reserve, and the development of management plans appropriate for the area and its population.

The identity and names of the new found species will be presented to the scientific community and the environmental authorities to evaluate their conservation status or risk of extinction.