A new study of reptile venom shows that venom is not always toxic, but rather can evolve into harmless compounds that perform other bodily functions. The study, published in Nature Communications, says that reptile venom contains a range of toxins that have evolved from harmless compounds that perform different functions in a reptile's body. When a venomous reptile bites a prey item those compounds target the biological processes of the prey, such as blood clotting or nerve cell signalling, creating havoc in the bitten animal's body, according to a press release put out by Bangor University in England. 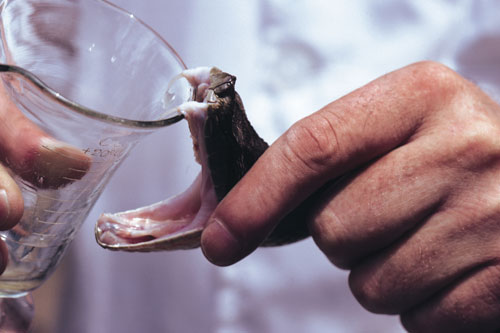 Snake venom isn't always toxic and can evolve into harmless compounds, according to a new study published in the journal  Nature Communications.

Researchers at Bangor and the Liverpool School of Tropical Medicine have discovered that those same deadly toxins can again become harmless molecules in the reptile's body, potentially enabling scientists to develop those molecules into drugs for human use. Dr. Nicholas Casewell of the Liverpool School of Tropical Medicine says that the evolution of venom is a complex process and that a snake's venom gland is a melting pot for evolving new functions for molecules.

Casewell said that some molecules are retained as venom for killing prey while others are used in new functions in the tissue of a reptile's body. According to the study, the presence of the harmless versions of these molecules could assist in the creation of a wider variety of drugs that don't have to rely on the toxic versions of the molecules.

Said Bangor University's Dr. Wolfgang Wüster, a co-author of the study: Many snake venom toxins target the same physiological pathways that doctors would like to target to treat a variety of medical conditions. Understanding how toxins can be tamed into harmless physiological proteins may aid development of cures from venom.