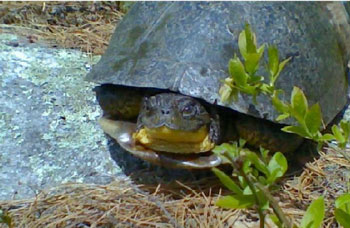 A nearly 10 year study of Blanding's turtles (Emydoidea blandingii) will soon be released to scientific journals later this year, according to a report in the Schriever Sentinel, Stephen Najjar, natural resource planner at the Natural Resource Section at New Boston Air Force Station in New Hampshire, and his staff spent close to 10 years studying the turtle on the 2,836 acre base. They trapped a bevy of turtles, taking their vital statistics and testing their DNA before attaching radio frequency transmitters to their carapaces to study their movements and habits. 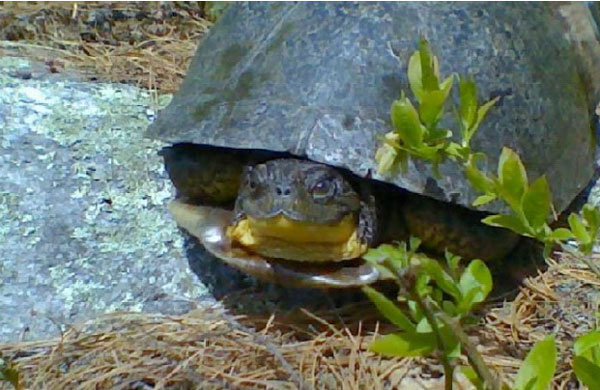 Some of the information that they have learned about the endangered species that calls this military base home is quite interesting. They have learned that females of the species tend to cross roads more often than males, giving them a higher probability of being struck by a motor vehicle, and the species follows a seasonal pattern of movement, moving from one body of water to another as the season changes. They also learned that the Blanding's travels a half mile to lay their eggs during nesting season, which occurs in early June, and that the nests of these turtles are often found on road shoulders as the females prefer gravel substrate to nest

In addition to studying the turtles, the researchers spoke to the base community about the plight of these turtles, letting people know that the turtles often cross roads and to be on the lookout for them so as not to hit them. “I think people on base are much more aware now. They are letting us know when they see them, so it seems like we've been successful in our efforts,” Najjar told the paper.

The researchers advised engineers on the impact certain projects would have on the turtles. For example, years ago the base employed an engineer who built vertical curbs during road construction projects. Najjar and his researchers were able to point out that curbs designed in this way were a barrier to the turtles, which exposed them to more of the road as they searched for a way around the vertical curbs. Today, curbs built on the base are now slanted or curved, enabling the turtles to move up and over them with no problem.

Loading...
Newer Post
Save The Frogs! Distributes More Than $3,000 In Save The Frogs Day Awards
Older Post
Actor Nicolas Cage Gives Up His Asian Water Monitor Due To Busy Schedule
Advertisement