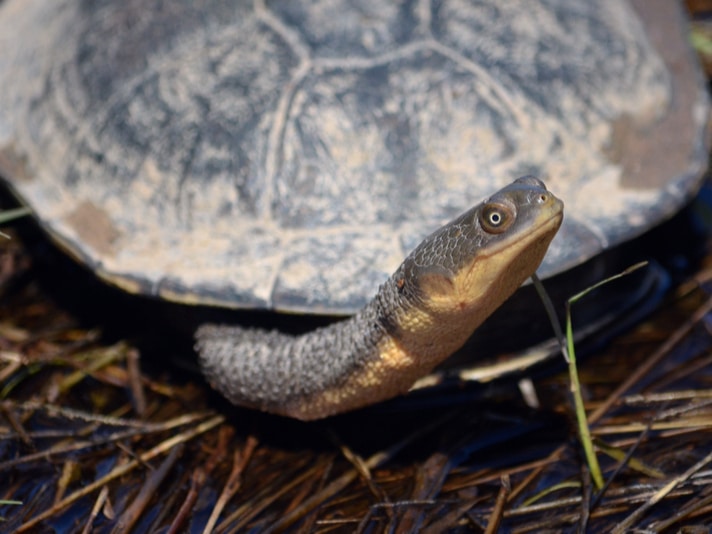 The common snake-necked turtle (Chelodina longicollis) is found on the eastern side of Australia from Queensland to South Australia. The common snake-necked turtle prefers freshwater rivers, lakes and swamps with soft sand and muddy bottoms, and plenty of plant cover above, and aquatic plants, submerged stumps and tree branches below. It is a basking species, usually catching rays on a large branch that rises out from the water’s surface. 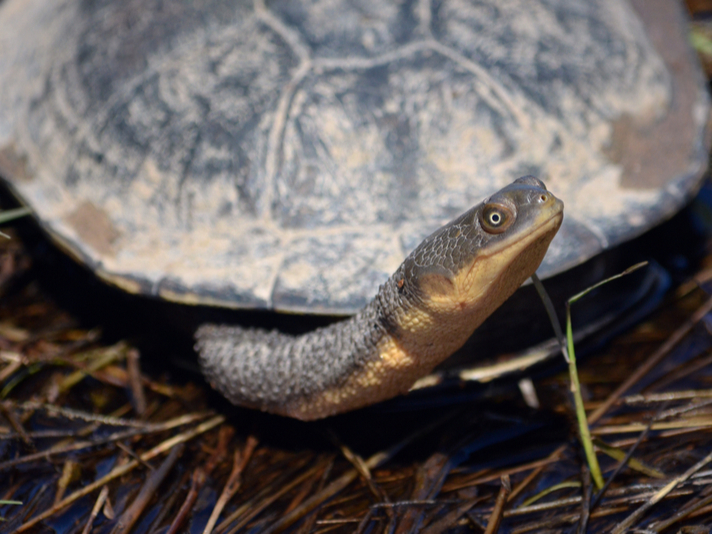 In nature, common snake-necked turtles mate in the Australian fall (May/June), and females will dig a nest hole in sandy soil along the riverbank in the late spring (September).

Like other turtles, the common snake-necked turtle has muscular legs and webbed feet for swimming. It also uses its sharp claws for digging in the river bottom for food, digging nests and tearing apart larger prey gripped in its mouth.

One of the smaller Chelodina species, C. longicollis reaches 10 inches in total shell length. Interestingly, its neck is nearly as long as its carapace when outstretched. The common snake-necked turtle's carapace is broad and flat, and it is typically dark brown to black in color. The plastron is yellow with black lines following the seams, which differentiates it from most other snake-necks.

In nature, common snake-necked turtles mate in the Australian fall (May/June), and females will dig a nest hole in sandy soil along the riverbank in the late spring (September). The clutch will consist of three to 10 eggs, depending on the female’s age and size. After a two- to four-month incubation period in the warm sand, the eggs will hatch, and the small snake-necks will make a hasty dash for the safety of the water’s edge. There they hide among the plants and leaves and feed on aquatic insects, small fish, tadpoles and other small, aquatic prey.

Like many aquatic turtles, common snake-necked turtles emit a foul-smelling liquid from their musk glands as a defense against predators. The smell is similar to that of a skunk, and it’s amazingly potent for such a small turtle. This obnoxious odor is no doubt an effective deterrent to a curious dingo or monitor. Luckily, snake-necks, and most other turtles, typically adapt to being handled and stop exuding this musk in captivity.

The Snake-necked Turtle is a Rare Captive

I purchased a small group of C. longicollis a few years ago. As this is a rare species of snake-necked turtle in captivity in the United States, I felt fairly lucky to put together a group consisting of two males and two females. All four long-term captive adults came from a zoo that had been unsuccessful in breeding them. They decided to convert their snake-necked turtle exhibit into a North American turtle exhibit and offered the animals to our Turtle and Tortoise Preservation Group facility in the hope that a move or different keeping methods would trigger reproduction. Sometimes, moving turtles to a new enclosure can “shake things up” reproductively and inspire behavior that the turtles seem to have forgotten.

The common snake-necked turtles were set up in pairs in large Waterlandtubs enclosures measuring 6 feet long, 3 feet wide and 2 feet tall. We filled each tub with fresh tap water and removed the chlorine with a chemical chlorine remover. A 250-watt Ebo-Jager heater helped to establish the temperature at 76 degrees Fahrenheit overnight. We added two cups of non-iodized aquarium salt to the water and installed a large wet-dry trickle filtration system. Substrate in the tub’s land section consisted of a damp mixture of 50 percent play sand and 50 percent peat moss, with a couple of handfuls of dry leaves added on top, making a pile large enough for the turtles to hide underneath if they wanted some security while on land. As most of the snake-necks in nature live in water with basic pH, I added roughly a half a cup of crushed coral per gallon of water to the aquatic section of the tub.

Handfuls of aquatic plants and a large oak stump in the water provide hiding places for the common snake-necked turtle as well as visual barriers. A visual barrier is necessary with many turtle species so that the smaller specimens, in this case the males, can keep out of the larger or more aggressive turtles’ way. Other than a few accidental bites during feeding time, we have found no aggression by the larger snake-necks toward the smaller ones.

The C. longicollis at the Turtle and Tortoise Preservation Group facility feed on a mixture of floating pellets made up of Zoo Med Aquatic Turtle Food, ReptoMin sticks, and Aquamax Fish Food three times a week. Many breeders report that their snake-necks are not fond of pellet food. Perhaps due to the age of my common snake-necked turtles and their long history of captive care, they more eagerly took to pellets. They will also readily consume fish, earthworms, crickets, roaches, superworms and thawed pink mice. These are offered twice a week and are a necessary part of their diet. I have not found them to be interested in plants or fruit.

Due to their love of food and eating, captive snake-necked turtles are often obese. This condition not only leads to a drop in fertility, but it can also cause kidney and liver damage.

Due to their “excitable” nature, snake-necks often suffer from neck bites, bitten tails, missing toenails and other injuries acquired when they are raised together. The young turtles bite anything that moves near them. In adult snake-necked turtles, these injuries are seen during courtship and mating, but they can also occur during feeding. Isolation for a few weeks is often all that is needed for wounds to heal.

If not offered a suitable nest site, these snake-necked turtles will generally lay their eggs in the water. Often, these eggs will hatch if recovered within 12 hours (sometimes longer for Macrochelodina species) and before the eggs are damaged or eventually drown. In fact, in nature more than one Macrochelodina species will lay their eggs in damp environments, and the northern snake-necked turtle (Chelodina rugosa) has been documented to lay its clutch of eggs in mud underwater (Kennett et al., 1993).

This is one of the few Chelodina species that can hibernate, and they often need the change from cooler winter temperatures to warm, sunny spring temperatures to trigger courtship and breeding. To simulate this change in seasons, within six weeks of setting them up in their breeding enclosures, we raised the temperature of the water to 80 degrees. This, combined with the water falling from the trickle filter systems, seemed to have an inspirational effect on the common snake-necked turtles’ reproductive behavior. We saw courtship and mating on numerous occasions, and within three months, we had six eggs in our incubators.

The oval common snake-necked turtle eggs were small, measuring 20 millimeters wide and 30 millimeters long. They were incubated in plastic shoeboxes in a warm room (82 to 85 degrees) in our facility, and they hatched in 65 days. The hatchling common snake-necked turtles were triggered to hatch early due to a hot day, which raised the temperature in the room to more than 90 degrees. All of the hatchlings pipped successfully, but all had extremely large yolk sacs, which would normally be absorbed in the final weeks of incubation. Due to an abrupt hatch, the yolk sacs were not completely absorbed. I placed each hatchling in a small deli cup on damp paper towels, and after an agonizingly long two and a half additional weeks in the warm room, the babies absorbed the yolk and were placed in a rearing enclosure.

The common snake-necked turtle rearing enclosure consisted of a 20-gallon-long aquarium with about 4 inches of water kept at 80 degrees (both day and night). This size enclosure can safely house three or four small snake-necks for the first five to six months, and then they need to be moved to larger enclosures. Elodea spp. and Cabomba spp. plants were added to give the hatchling turtles some places to feel secure and to rest after swimming. As young and adult turtles sometimes bask, we added an aquarium light fixture with UVB-emitting bulbs and a basking spot with a 100-watt spotlight mounted above. We tried to keep the water temperature in the 80- to 82-degree range. The basking spot reached temperatures of 90 to 95 degrees.

The baby common snake-necked turtles, a little more than an inch long at hatching, were fed daily. They were offered pellet food but showed little interest. When mosquito larvae, small feeder fish, blackworms and tubifex worms were added to the enclosure, they began eating with ferocious appetites. These small hatchlings grew relatively quickly, reaching maturity in four to five years.

The large, inquisitive eyes of these common snake-necked turtles make me smile as they greet me each day in my turtle facility. I have found all of the snake-necked turtles very hardy and interesting captives, and I am happy to add some of my captive-hatched offspring to this fascinating hobby.