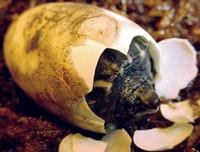 Although not necessarily difficult, breeding the Mexican giant musk turtle (Staurotypus triporcatus) is a bit more involved than typical mud and musk (kinosternid) turtles. The most obvious difference is size: adult S. triporcatus are considerably larger than their cousins. The species also tends to breed in late fall and winter in the United States, so a potential breeder must be on the lookout for nesting during a rather unusual time of year, in turtle terms at least. Lastly, giant musk turtles’ eggs undergo a period of diapause, which requires a little more involvement than some species. 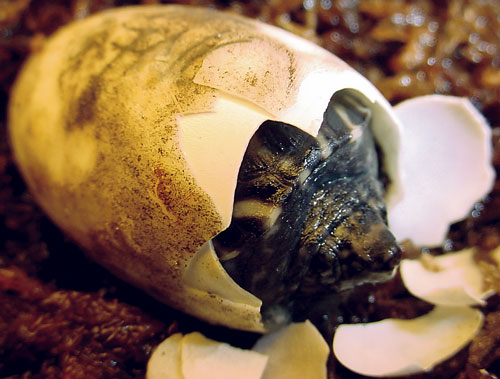 Courtship and breeding of this species is more or less typical of kinosternids. Chasing and biting is commonplace for both sexes, but separation is usually only necessary if one turtle is particularly rough with the other. Copulation can last from several minutes to nearly an hour, and it might be repeated numerous times throughout the course of a day and perhaps even at night. 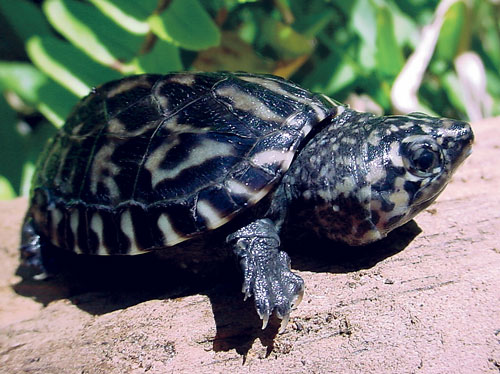 Female turtles lay a clutch of four to 12 elongated, brittle-shelled eggs a month or two after successful breeding. Two clutches per breeding season are not uncommon. Occasionally even a third clutch is produced, but egg quantity usually decreases with each successive clutch. Females have been known to retain sperm for at least a year following the last known exposure to a male. However, the fertility rate lowers with the span of time between breeding and egg deposition.

Giant musk turtle eggs are known to undergo a diapausal period. This means the embryo essentially goes into a state of suspended animation before some environmental event causes development to resume. For maximum success, anyone attempting to breed this species should try to accommodate the diapause to maximize the overall hatch rate. Some eggs hatch without diapause, but the success rate is considerably lower.

The most effective way to successfully incubate S. triporactus eggs is to maintain them in a cool, dry environment for the first two to three months of incubation. Lightly moistened sand is an ideal substrate, and an initial temperature around 75 degrees Fahrenheit has proven to be effective. Fertile eggs band as normal, and when the egg is “candled,” shining a light into an egg to see what’s inside, a tiny pink speck, the developing embryo, may appear in the first month.

About a month after the egg has banded, gradually increase the moisture and temperature of the incubator. If a spray bottle is used to moisten the sand, do not directly spray the eggs. This often results in the death of the embryo. Over a period of roughly two weeks, increase the moisture of the sand until it clumps like brown sugar. Simultaneously increase the incubation temperature until a range of 84 to 88 degrees is achieved. Hatchling S. triporcatus sex is determined chromosomally rather than by temperature, so it is not possible to manipulate the offspring’s gender in that manner. 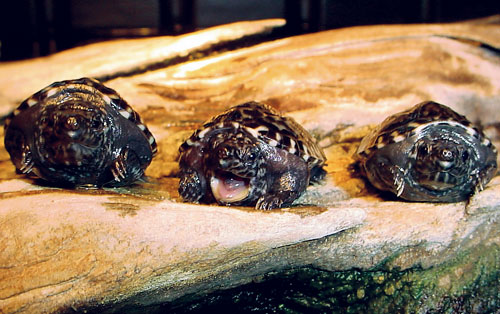 Hatchlings can coexist peacefully with one another if kept together early on.

Occasionally the turtle may remain inside the egg and await optimal environmental conditions before emerging. Inducing the neonate to pip the egg is sometimes possible or even necessary. Do this by significantly increasing the moisture of the incubation substrate. However, this should only be done with the utmost caution. It also can cause an immature neonate to pip before it has fully developed and completely absorbed its yolk sac.

Once baby turtles are out of their eggs and have absorbed their yolk sacs, they may be kept in scaled-down conditions identical to their parents. They usually begin feeding within a week to 10 days of absorbing their yolk sacs, and their diet should be primarily animal matter and, ideally, a nutritional pelleted food. Hatchlings grow quickly, and if raised communally, they are less likely to exhibit aggressive behavior toward tankmates.

Young S. triporcatus are truly cute and entertaining animals, and hatching and raising them is well-worth the effort required to breed them.