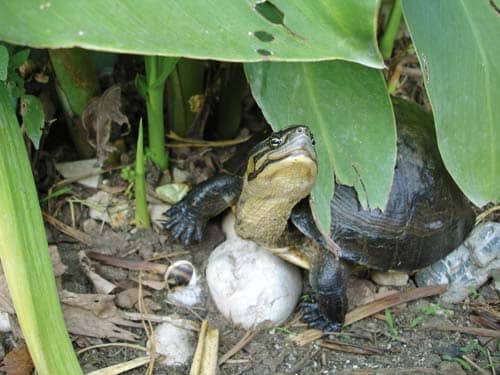 Cuora amboinensis is not shy, and this turtle typically makes a very entertaining and active pet. 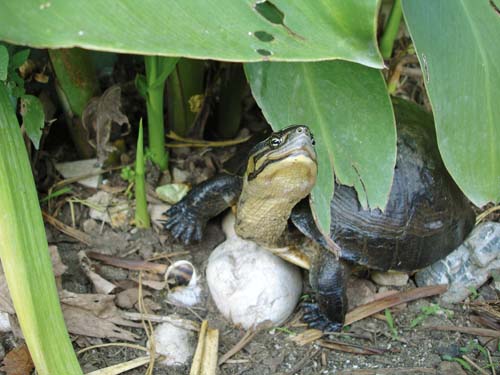 The Asian box turtle ranges throughout southeast Asia, including Bangladesh, the Nicobar Islands, Myanmar, Assam, southern Vietnam, Sumatra, Java, Borneo, Sulawesi and the Philippines. All these areas are characterized by a tropical or subtropical climate, and they lack any type of actual winter. Within its range, C. amboinensis can be found in ponds, flooded rice plantations, swamps and other aquatic habitats with a slow current. It is primarily aquatic, although it may be found far from water, usually after rain and when humidity is high.

The carapace of an adult Asian box turtle is highly domed, with a medial craniocaudal keel that tends to disappear with age. The oldest specimens, in fact, have a smooth carapace. The carapace color is not very variable, ranging from dark brown to black, and the plastron is pale yellow to light brown. The majority of specimens display a large blotch in the center of the plastron, and black or brown spots on each scute. Black stains are also present on the ventral surface of the marginal scutes. 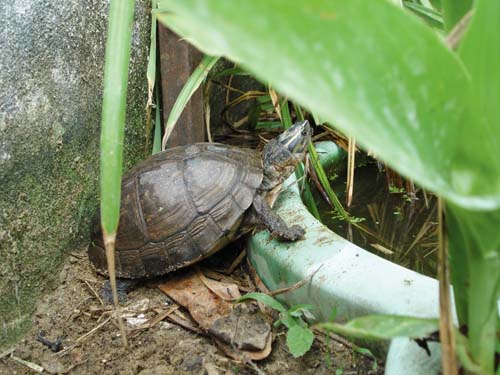 There are no major differences in form and size of the carapace between adult males and females.

The turtle’s head, with its prominent nose, exhibits an elegant livery; skin color ranges from dark brown or black on the upper surface to pale yellow or light gray on each side and on the inferior part of the neck. On each side of the head, there are three yellow stripes: the first superior line extends from the nose to the base of neck, passing above the eyes; the second, runs from the nostrils through the eyes and meets the third line on the tympanic membrane. The lower jaw is yellow, as is the rest of the inferior surface of the neck.

It’s simple to sex adult C. amboinensis. The male’s tail is rather thick and long, and the cloaca is situated more toward the tip, while the female’s is considerably shorter and the cloacal opening is near its base. Also, the plastron of the male shows a notable concavity to assist with copulation; the female’s plastron is absolutely flat. There are no major differences in form and size of the carapace between adult males and females.

Juvenile Asian box turtles are very similar in appearance to the adults, though they have a flattened carapace with three prominent keels. Sexual characteristics start to become evident when the turtles reach about 4 inches in length.

Where I live in Italy, I keep my Asian box turtles outside for about six months of the year and inside for the other six. During the warmest months they are kept in an outdoor enclosure with an aquatic section located between two land areas comprised of differing substrates. One is one part sphagnum peat to two parts river sand, while the other is a layer of soil covered by a fine bark layer about 1½ inches deep. 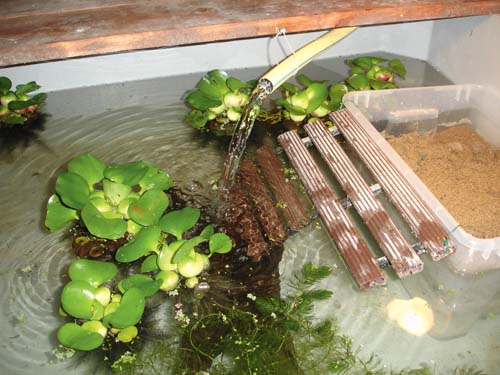 Plants on the land area include Indian shot (Canna indica) and different types of ferns. In the water, I keep watercress (Nasturtium officinalis), water hyacinth (Eichhornia crassipes), water lettuce (Pistia stratiotes), water lentil (Lemna minor), mosquito/water fern (Azolla caroliniana) and floating fern (Salvinia natans). All of these aquatic plants are regularly consumed by my turtles, so I replenish them often.

When outside temperatures drop below 62 degrees Fahrenheit I keep my Asian box turtles in an indoor tub that measures 4 feet long by three feet wide, with a water depth of 10 or 11 inches. Various aquatic plants are kept in the water, and for land I provide a plastic box measuring 20 by 12 inches, filled with a 1:2 ratio of fine gravel to river sand. This land area is used as a basking site by all the turtles, and an egg-laying site for females. In my experience, females spend more time on land, while males seldom emerge from the water. Juveniles are almost entirely aquatic. 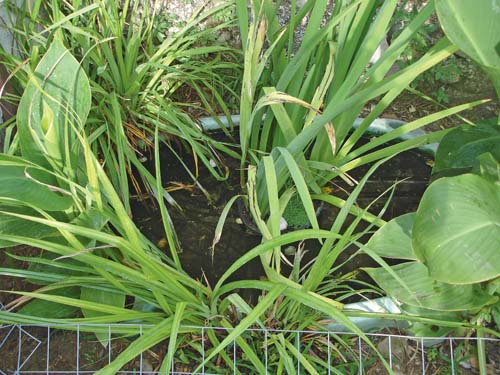 The indoor enclosure is illuminated by a fluorescent aquarium tube for about 11 hours a day, as well as a 35-watt Solar Raptor bulb placed over the land section to provide a basking spot. It is on for three hours a day, from 11:00 am to 2:00 pm, and the basking temperature beneath reaches about 95 degrees Fahrenheit.

This enclosure is kept in a room that houses other species of exotic turtles. The ambient air temperature ranges from 80 to 82 degrees during the day, down to 64 to 68 degrees at night. The water temperature in the enclosure is maintained within similar parameters.

For the first 15 days after hatching, I keep Asian box turtle hatchlings in small plastic boxes containing a few inches of water. Seven to 10 days after they hatch, I begin to offer them bloodworms (Chironomus) and small pieces of chicken. After the first month I move them to a small aquarium (about 12 by 12 inches) with about 2 inches of water. A rock is provided to help them emerge from the water, and water plants are included. The water in this juvenile enclosure is filtered by a small filter and pump.

Cuora amboinensis is strongly omnivorous in nature, feeding on a wide variety of vegetation and prey, including insects, aquatic invertebrates, small fishes, amphibians and other small prey that it is able to capture. I offer my Asian box turtles a variety of items, enriched with a reptile/turtle vitamin powder at least once a month. 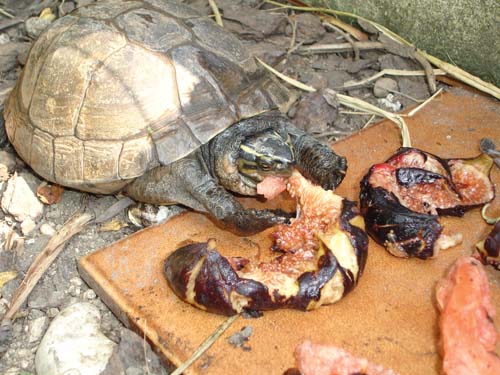 A female eating figs and watermelon.

I also offer my Asian box turtles all kind of fruit, including banana, cherries, apricots, peaches, melon, figs, watermelon, pears, apples, mango and papaya, as well as vegetables, such as tomatoes, zucchini, pumpkin and cucumbers. Less frequently, I offer them tinned cat and dog food.

Cuttlebones are always present in both the outdoor and indoor enclosures. It is especially favored by females that are developing eggs.

I bought my first Asian box turtle, a female, in November 2000. I didn’t know a lot about the species, and back then it was not so available in the pet trade. It took me two years, in April 2002, to find a potential mate for my female. After about 60 days of quarantine I put them together in the same tank for the first time. The young small female, born on July 20, 2012, in comparison with her grandmother.

It didn’t take long for courtship behavior to be displayed, during which the male would extend its neck along each side of the female’s head. Eventually, the male mounted the female’s carapace while biting her neck. Mating took place, lasting about 15 minutes. About 60 days later, give or take a couple weeks, I found my first two Asian box turtle eggs. Unfortunately, they proved infertile. I have since learned that egg coloration varies from rose to pale yellow immediately upon deposition, but two to four days afterward a fertile egg shows a white blotch that will grow larger over the following days. Eventually it forms a ring around the egg before it becomes entirely white. This color change indicates that the egg is fertile. A female searches for a place to lay eggs.

Incubation typically ranges between 70 and 90 days. I put the eggs in a small plastic box filled with vermiculite that is moistened with water in a ratio of 1:1 by weight. My incubators are set to 85 degrees Fahrenheit with a humidity level of 80 to 90 percent. I use two types of incubator. One is a commercially manufactured model (by Lucky Reptile) that tends to dehydrate the vermiculite. This requires me to check the eggs often and to add additional water, if necessary. My other incubator is home-made from a polystyrene box. It contains a few inches of water heated by an adjustable aquarium heater. A piece of tilted glass prevents condensation from dropping onto the eggs, which could damage them or inhibit proper development. 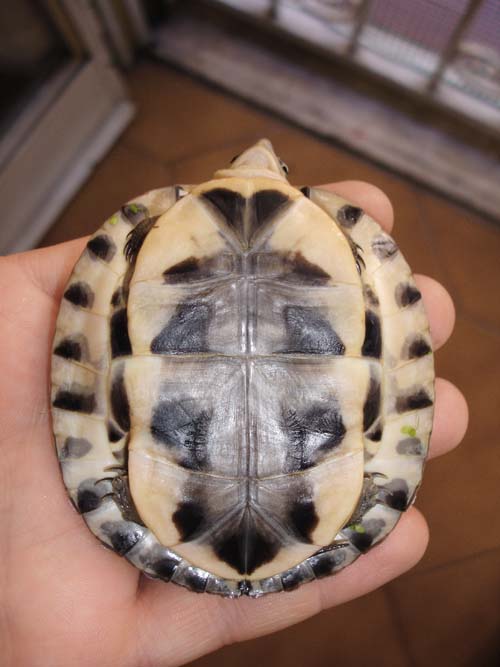 Imported Asian box turtles frequently arrive in bad condition and are dehydrated and exhibiting mild to severe shell damage. New arrivals should be taken to a reptile veterinarian soon after procurement for a fecal exam and to treat for internal parasites, if necessary. Whenever possible, it’s recommended that you buy captive-bred turtles, not only for health reasons but also because C. amboinensis is becoming rare in nature, due to loss of habitat and demand for the pet trade. It is listed in Appendix II of CITES, and its status is considered Vulnerable by the IUCN.

A healthy Asian box turtle will provide great satisfaction to its keeper. Cuora amboinensis is not shy, and this turtle typically makes a very entertaining and active pet.

I would like to thank Nicola Martin, who shares my passion for this wonderful turtle, and for frequent exchanges of views and data that allowed me to better study Cuora amboinensis. I also thank Gianluca Bastianelli for help with procuring photos, and Russ Case for offering me the opportunity to write this article for REPTILES magazine.

Davide Carlino was born in Cassino, Italy, in 1982. He is a medical student who currently maintains about 200 specimens of more than 50 turtle and tortoise species, and he breeds more than 20 species. His primary focus is Asian and North American turtles, especially box turtles of the genera Cuora and Terrapene. He is a member of several Italian turtle and tortoise conservation associations, collaborates with Tarta Club Italia and is the author of a 2010 book about the red-footed tortoise, La tartaruga dalle zampe rosse, Chelonoidis carbonaria.