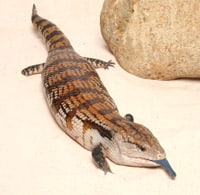 To be honest, I didn’t used to think blue-tongued skinks (Tiliqua scincoides, T. gigas, etc.) were very interesting. I thought that, despite their cool blue tongues, that they looked kind of boring. To me, their tongue was their most interesting feature – it’s their namesake, after all — but it wasn’t like they walked around with it hanging out to be appreciated all the time. I preferred my lizards on the spiny, more agile and active, side, rather than the sausage-shaped, more lumbering types such as blue-tongues.

This opinion, however, went out the window the more I got to interact with blue-tongues. Now I think they’re very cool, and I can totally see owning a blue-tongued skink in the future. It didn’t take many handlings, only a few really, for me to be won over by these gentle, mellow lizards. There are a variety of blue-tongues available, including the northern, Irian Jayan and others. They can sometimes be a bit hard to tell apart, at least for me, one who does not have experience with them. I think more than once, after I’ve published an article in REPTILES about blue-tongued skinks, we got a letter notifying us that a blue-tongue was misidentified in a photo (I hate that).

Blue-tongued skinks can be a bit pricey, especially when compared to much more prolific breeders, such as the bearded dragon. The reason for this is, in part, because they only give birth (blue-tongues are viviparous, meaning they give birth to live babies) once a year, unlike beardies and other lizards that can lay multiple clutches of eggs over the course of a year. Lizards that breed only once per year are not generally as profitable for breeders to work with because they will not be able to enjoy a high turnaround rate when it comes to selling youngsters. With this said, however, I believe I’ve been seeing increasing numbers of blue-tongued skinks available at reptile expos. Of course, I always advocate the purchase of captive-bred reptiles, and that goes for blue-tongued skinks, too. You should know the reasons by now: they’re generally healthier than wild-caught reptiles, which have had to endure the stress associated with capture and shipping; captive-bred animals are less likely to harbor parasites; they don’t affect wild populations, etc.

Blue-tongued skinks can be great lizards for beginners. They are thick-bodied lizards that are easy to hold, even for children. They’re not usually very squirmy or delicate. They’re rather burly, really. While people should be careful when holding any reptile, a blue-tongue skink is not as delicate as, say, a leopard gecko, the tail of which you have to be extremely careful about. Blue-tongues live, on average, for about 20 years, so anyone considering a blue-tongue should remember this: once you get one, you may have it for quite a while. But that’s actually a good thing, right?

Generally speaking, an adult blue-tongued skink gets to be about 16 to 20 inches long. Therefore, an enclosure measuring about 3 feet in length would be OK for one (and it is generally recommended that you keep one per enclosure). Blue-tongues, you should not be surprised to learn, are very much terrestrial and not wired for climbing. Their enclosures should reflect this, with floor space much more important than height. They come from warm climates so you know the drill: heat lamps along with full-spectrum lighting will help you maintain healthy blue-tongues. The enclosure’s temperature gradient should have a peak temperature in the high 90s Fahrenheit beneath the basking light to a cooler end in the high 70s. A large, flat rock beneath the basking light will be appreciated by blue-tongues that may not be able to maintain their balance on a branch. This is not to say you couldn’t place a thick, sturdy climbing branch in their enclosure, but don’t use one that’s very elevated. Remember, these guys are not climbers, so they don’t really need branches. Nighttime low temperatures should not fall below 60 degrees, so if your house gets cold you may need to use a nighttime heat lamp, heat pad, etc. to maintain this temperature. No matter what kind of heating element you use, though, you definitely need to provide a basking lamp.

Substrate for blue-tongues can be aspen shavings or similar substrates that will allow the blue-tongue to burrow. Yes, they’re burrowers, so there may be times when they are not in full view. That’s OK, though, because allowing them to burrow helps make them feel safe and sound, and we all know how important it is for pet reptiles to feel secure, right? Otherwise, they may stress out and get sick. That’s no good for anybody. There are other reptile-specific substrates, such as ReptiBark and others that could work. When considering substrates, keep possible impaction issues and dust levels in mind, as well as ease of cleaning and susceptibility to mold.

Water can be provided in a bowl. Use one that won’t tip over when a bulky blue-tongue crawls onto it, and keep it clean because the blue-tongue may use this bowl in which to defecate. You definitely don’t want your lizard drinking fouled water. If water does get splashed around be sure to replace any moist substrate, as leaving it can encourage mold and stinkiness. As for food, blue-tongues, like bearded dragons, are omnivores, meaning they eat both meat and plant matter. Healthy supermarket vegetables you could offer them include bok choy and mustard, collard and dandelion greens. They’ll eat fruit, but don’t give them too much as this can lead to diarrhea if given too often. In regard to meat, dusted insects are fine, as is cooked meat such as chicken and turkey (raw is not recommended) and mice of appropriate sizes (frozen/thawed mice are recommended). If you use a substrate comprised of particles, such as those mentioned previously, feed your blue-tongue from a bowl, or consider placing it in a separate, bare-bottomed enclosure when feeding.

I know I’ve said it before, and here I go again: Read up on any animal you plan to keep, and that includes these sausage-shaped lizards that have won me over. See if they won’t win you over, too!