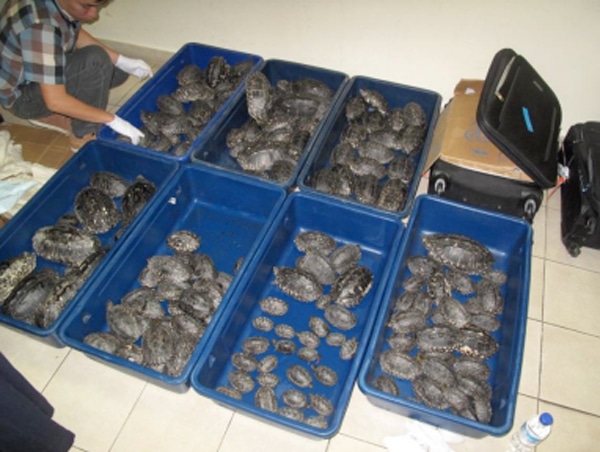 Two Russian nationals who were caught July 9, 2015 trying to smuggle 206 endangered turtles from Bangladesh to Indonesia were apprehended in Singapore and were sentenced this week  to 15 months in jail. 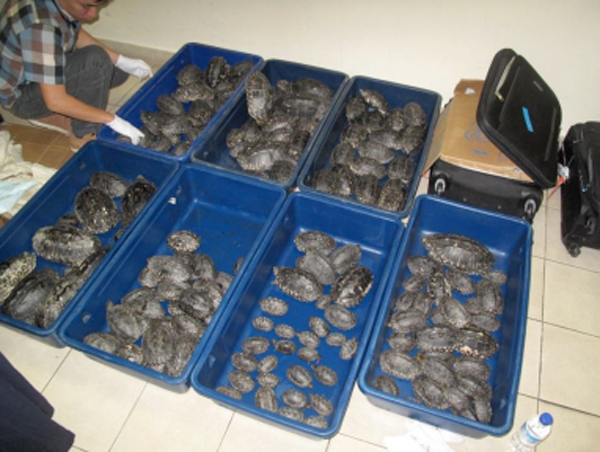 A total of 206 spotted pond turtles were confiscated in a smuggling attempt.

The Russians apparently stuffed four suitcases with spotted pond turtles (Geoclemys hamiltonii), a critically endangered species protected under the Convention on International Trade in Endangered Species of Wild Fauna and Flora (CITES). They were in transit through Singapore when an aviation security officer detected the turtles in the luggage.

“The Singapore Government has zero tolerance on the use of Singapore as a conduit to smuggle endangered species and their parts and products,” said Ms Lye Fong Keng, Deputy Director, Quarantine & Inspection Group (Wildlife Section),  Agri-Food and Veterinary Authority (AVA).

“We will not hesitate to take harsh enforcement actions against any person or company that smuggles wildlife through Singapore. AVA will continue to cooperate and collaborate with partner enforcement agencies nationally and internationally to curb wildlife trafficking.”

The Russians, Pavlychev Maksim, 38; and Radkov Aleksei, 34, claimed that a friend asked them to deliver the turtles to Indonesia and helped to pack the turtles in suitcases lined with diapers and cloth to help absorb the waste. When Singaporean authorities confiscated the turtles and arrested the men, the turtles were dehydrated and in bad shape. A total of 27 have perished due to the smuggling attempt.

The spotted pond turtle has been protected by CITES and the Endangered Species Act since 1976. They are captive bred in large numbers in California and Florida. Females grow to about 12 inches in length while males are usually 7 to 8 inches in length. They can live 15 to 20 years.