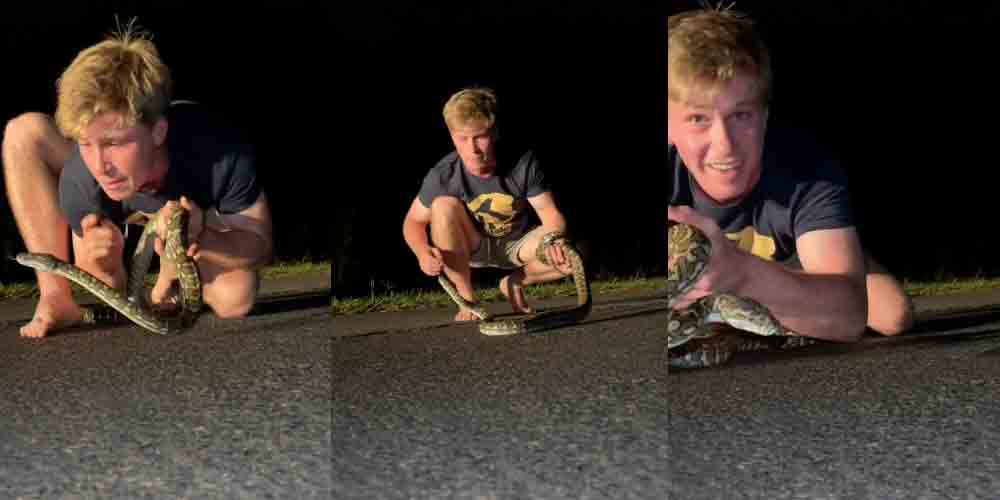 Robert is growing into quite the reptile handler. Screengrab via Robert Irwin/TikTok

The python was released into the bush away from the zoo.

Robert is growing into quite the reptile handler and while his voice and mannerisms are his own, you can still see the father in the son.

Robert Irwin was out driving inside the Australia Zoo when he happened upon a carpet python (Morelia spilota) on one of the zoo’s roads. Irwin proceeded to get out of his vehicle, propped his cell phone camera on the road so he could record and proceeded to wrangle the large constricting snake while giving some details to the snake’s predicament.

“Have a look at this big fella,” Irwin said as he exited his car,” Irwin said in the video he shared to TikTok. “He’s in a very very bad position. He’s on a road, he’s at Australia Zoo he’s in the zoo. He’s got crocs on that side, he’s got an aviary full of birds. He’s either gonna get eaten or he’s gonna eat one of our animals.”

“I’ll drive him all the way out to some nice natural bush land where he’s come from to give him a better chance at life. and also to make sure he doesn’t eat any of the zoo residents because we don’t really want that.”

“Have look at him he’s just gorgeous”

While we all miss Robert’s father Steve Irwin, Robert is growing into quite the reptile handler and while his voice and mannerisms are his own, you can still see the father in the son, which is great for all of us. If you ever go to Australia, make sure to visit the Australia Zoo. It is definitely on my bucket list!

Carpet pythons are native to Australia and New Guinea and are a hardy medium sized python. They are called carpet pythons due to their beautiful colorations that some say look like the patterns and colors of the woven carpets of the Middle East. There are a range of subspecies of carpet python and they are also widely captive-bred for reptile keepers. You can read the carpet python care sheet here.