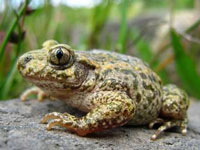 Road Development Can Have Adverse Effects On Amphibians

The dangers of development can affect small amphibians just as much as larger mammals, according to a recent Spanish study focusing on palmate newts (Lissotriton helveticus) and midwife toads (Alytes obstetricans), so-called because males carry the fertilized eggs around their hind legs for a time. Both species are now regarded as vulnerable there.

The building of highways may have a serious impact on amphibians, both by increasing the likelihood of them being run over, and by reducing their genetic diversity, as populations become more isolated from each other. There are key differences that have become apparent between the newts and toads in this study though, which have major impacts for their future conservation.

Impacts Differ
“The midwife toad and palmate newt populations have very different sensitivities to the impact of roads in their territory” explains Claudia García-González, researcher at the University of Oviedo. “These amphibians do not possess the same dispersal capabilities”.

By means of DNA testing of the different populations, so the team analyzed the number of roads that the amphibians have to cross, in order to reach another colony, and work out the various genetic barriers between them. The study’s results revealed that the midwife toads suffered much more from the incursion of roads in the Trubia Valley, becoming increasingly isolated as a result, when compared with the newts.

Seeking Solutions
While reducing the level of traffic on roads could help to protect the newts, the researchers believe this would be of little value to the toads. “A reduction in the number and speed of vehicles should be added to other actions, such as building plant corridors or passages to help connect humid areas with water habitats," García-González suggests. This will help the toads, given their more specific habitat requirements.  “In order to minimize the impact of roads on biodiversity, so it does not seem appropriate to only consider one strategy to protect amphibians. We must consider the individual needs of each species and take into account that there are many factors that impact on them,” she suggests. “Many animals, apart from amphibians, could also benefit from building paths on existing bridges or new pathways for crossing rivers.”