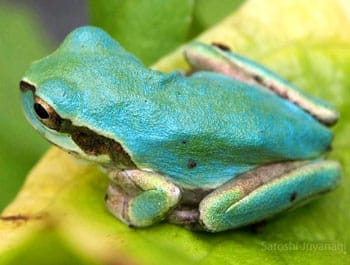 More than 1,000 Hellbenders Hatched This Fall At St. Louis Zoo
Can’t Tell An Invasive Cane Toad From A Native Australian Frog? There’s An App For That
Asian Elephant Tracks Are Ideal Breeding Sites For Frogs

A Japanese rain frog (Hyla japonica) found in a man's garden in Japan has caused a bit of interest due to its odd coloration. The 2cm frog, also known as the Japanese treefrog is common in Japan, and is blue in color rather than its typical bright green, according to a news report in Japan's Asahi Shimbun. The 67-year-old man who found the frog in his garden in Yamaguchi Prefecture, says the frog has been living inside and around the flowerpots that are in his garden.

To determine why the frog was such a strange shade of blue, a biologist with the Yamaguchi Museum was summoned, who said that the frog normally has bright green skin due to blue and yellow pigments that the frog develops, but this frog for some reason is not capable of producing the yellow pigment. The inablity of the frog to produce the yellow pigment is what gives the frog its blue coloration. "It is a statistical oddity,” the researcher told the Asahi Shimbun.

The Japanese rain frog is similar to the common treefrog but has slightly shorter hind legs and lacks an inguinal loop. It is commonly found in Japan, Korea, and China as well as inner Mongolia and Russia. Its habitat includes leaf litter, rodent burrows, holes found in trees and under stones. They are common in cities throughout most of Japan as well and breed in still ponds, puddles, lakes, and other bodies of water that is dense in vegetation. They are not CITES listed as a threatened species and appear abundant throughout its range. Check the video of the mutant blue rain frog below.