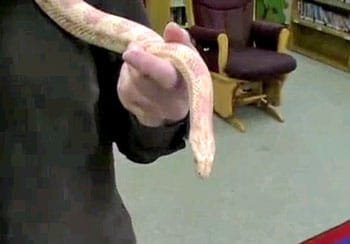 Peaches was killed in March after someone poured cleaning solvent in her enclosure.

A $500 reward is being offered to find the person who killed a popular corn snake at a Connecticut library in March. Friends of Animals, an animal rights group based in Darien, CT., has put up the reward in hopes that someone will come forward with evidence that enables the local authorities to prosecute whoever was involved with the killing of Peaches, who lived at the library for more than eight years and was extremely popular with the children.

"It was awful to hear the news about the snake," Priscilla Feral, president of the Friends of Animals told the Connecticut Post. "Someone should know who did it," she said.

Getting Young Corn Snakes to Eat

Library workers noticed a chemical smell emanating from the snake's enclosure and discovered a can of cleaning solvent near the snake's tank, and cleaning solvent in the tank. Peaches was taken to a veterinarian in Bedford, NY and died five days later. With the monetary reward the library and its patrons hope that the case is resolved. A detective with the city's police department was at the library last week and the investigation continues.

The corn snake Pantherophis guttatus (Elaphe guttata) is one of the most popular snakes in the hobby, especially with those new to the hobby. They are generally docile snakes and come in a variety of different color patterns. They are fairly easy to keep and make excellent animals for the first-time snake keeper.