A popular pet snake at the Huntington branch of the Shelton Library in Connecticut was killed by someone who poured cleaning solvent into the snake's enclosure March 18 in an act of what some call animal cruelty. After the library staff discovered where the chemical smell was coming from, they called a local vet in an attempt to save Peaches and also called the police. Peaches, a corn snake that was donated to the library eight years ago by a girl who went off to boarding school, died five days later. She was very popular with the many children who visited the library, library director Shawn Fields told WTNH News 8. 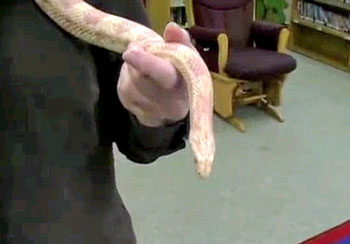 "Even the older kids were weeping openly," Fields said. "She was around most of these kids their entire lives and they were attached to her. And it has been really really difficult for the staff as well.  We just put together a memorial in her tank and tried to write the language on the announcement in such a way that little kids couldn't read it themselves," said library director Shawn Fields. "They would need their parents to talk about it with them."

Library patrons are hoping that the culprit in this crime is apprehended. The idea of replacing Peaches has not yet been discussed.