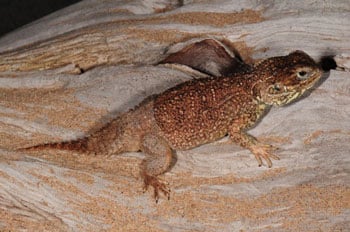 New Species Of Lizard Of The Family Agamidae Discovered In Somalia

Findings published in the Journal of Zoological Systematics and Evolutionary Research

An amateur herpetologist has discovered that the agama lizard that reptile lovers have been keeping for years is apparently not what it seems. Tomas Mazur, an amateur herpetologist from the Czech Republic has discovered that the beaver-tailed agama that is popular in the trade is actually not the beaver-tailed agama, but a new species of agama from a different region of Somalia.

Two species of flat-tailed agama lizards were described in 1882 and 1935 that came from Hargesia town in Somalia; Xenagama batillifera, the beaver-tailed agama, and Xenagama taylori, the turnip-tailed agama. These lizards are apparently rare in the pet trade. The new species, named Xenagama wilmsi is the lizard that can be found in the trade.

According to Mazur, Xenagama batillifera does not come from the same region as the other two agamas and actually lives in a remote region of Somalia where reptile hunters do not go. It apparently has not been found in any herp collections and is rare in museums. The new species was previously known as a geographic variant of Xenagama batillifera but is in fact a new species, according to Mazur's research paper, which was published in the Journal of Zoological Systematics and Evolutionary Research.

A second article will appear in a special issue of Acta Herpetologica. Mazur and fellow researchers Philipp Wagner and Aaron M. Bauer also noted that the new species has a tail that is shorter than its body and head but sports a tail base that is less discoidal than that of Xenagama batillifera or Xenagama taylori.

An abstract of the paper can be found in the Journal of Zoological Systematics and Evolutionary Research.