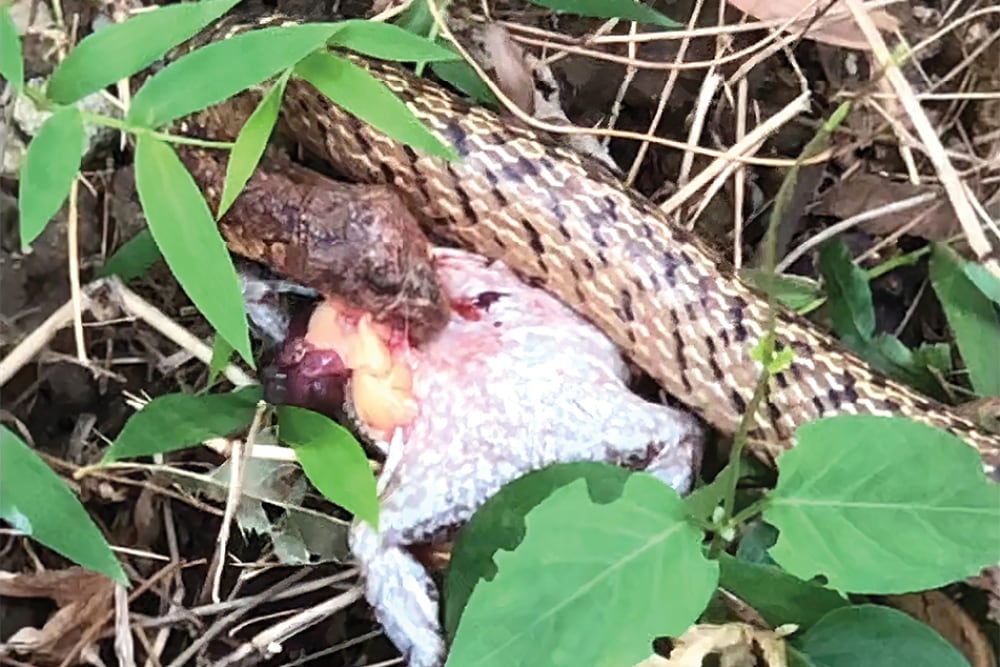 This year, the same researchers documented how the Taiwanese (or Formosa) kukri snake (Oligodon formosanus) also slashed the bellies of bullfrogs (in this case the banded bullfrog, Kaloula pulchra) to eat their guts and in some cases ate the amphibians whole. The researchers used citizen scientist video to document how the Taiwanese kukri snake cut open the abdomen of the amphibian, stuck its head in the abdomen of the bullfrog and performed a death roll, in what the researchers describe as an effort to tear off the frog’s organs so it could more easily eat them.

The head of Oligodon formosanus was inserted deep into the abdomen of Kaloula pulchra. Photo JL

In the first instance, Oligodon formosanus attacked a banded bullfrog, biting the lower part of the amphibians’s belly. The frog then proceeded to inflate itself as the snake cut open the belly and inserted its head into the abdomen. The scientists describe how the snake rotated its body while its head was in the abdomen of the bullfrog, a total of 15 times. After this, the video ended. The observer left the scene and returned later and wasn’t able to locate the frog or the snake and it is presumed the snake consumed the frog.

The second observation involving Oligodon formosanus details how the snake was observed biting and chewing the organs of an adult banded bullfrog after it had bit a hole in the frog’s belly. The snake worked at an apparent rapid pace and several of the frog’s organs spilled out of the hole created by the snake. It wasn’t observed if the bullfrog was alive or dead when the citizen scientist encountered the scene, but the snake continued to feed on the deceased frog.

Fordonia leudcobalia feasts on hard-shelled crabs by crushing them first with its jaw, and Gerard’s water snake (Gerarda prevostiana) rips freshly molted crabs into bite sized chunks and then swallows those chunks whole.