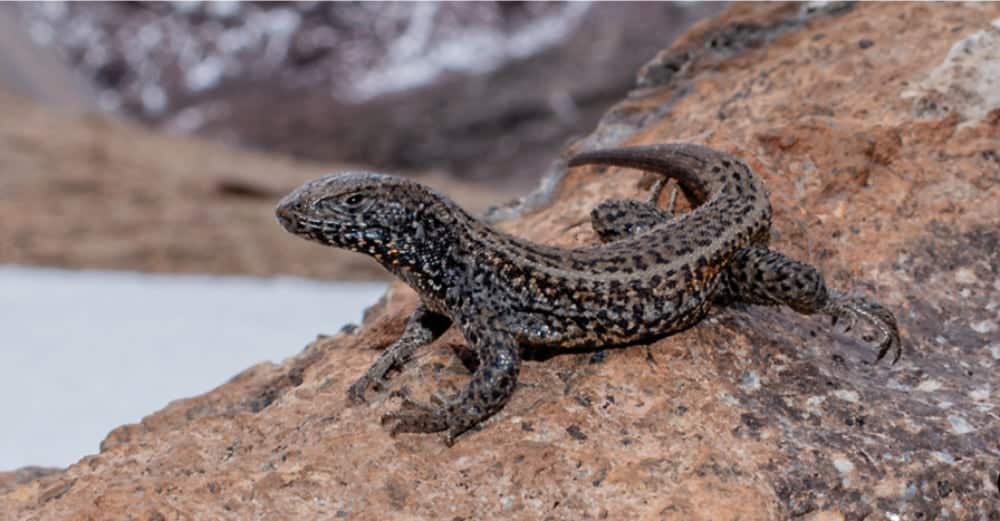 Researchers in Peru have discovered what they believe is the world's highest altitude reptile, a species of lizard of the South American genus Liolaem

Researchers in Peru have discovered what they believe is the world’s highest altitude reptile, a species of lizard of the South American genus Liolaemus. A population of these lizards were observed at an elevation of between 5,000 and 5,400 meters, moving amongst the rocks of the Chachani mountains, which are located 20 km north of Arequipa in south-western Peru.

The lizard,  Liolaemus aff. tacnae, is so named due to its similarity to L. tacnae which can be found at 4,000 meters elevation 30 km southeast of the Chachani mountains. The researchers noted that a more detailed analysis of this reptile is needed in order to determine the taxonomic status of the high mountain population of these lizards. The species is mottled gray and brown with distinct spot patterns on its back. It is about 11 cm in total length.

According to the researchers, Liolaemus aff. tacnae was observed more than 200 meters in elevation higher than the previous highest living reptiles, two Bolivian populations of Liolaemus that were found between 5,060 and 5,176 meters, and 100 meters higher than Phrynocephalus erythrurus, an Asian lizard species found on the Tibetan plateau at 4,500 to 5,300 meters.

About the Liolaemus Genus

Liolaemus is a genus of iguanian lizards that inhabit South America. There are more than 225 described species and are found in the Andes and its lowlands from Peru to Tierra del Fuego, the southernmost, smallest, and least populous province in Argentina. Most are omnivorous but a few are strictly insectivores and herbivores.

The complete paper, “A high mountain lizard from Peru: The world’s highest-altitude reptile” can be read on the Herpetozoa website.