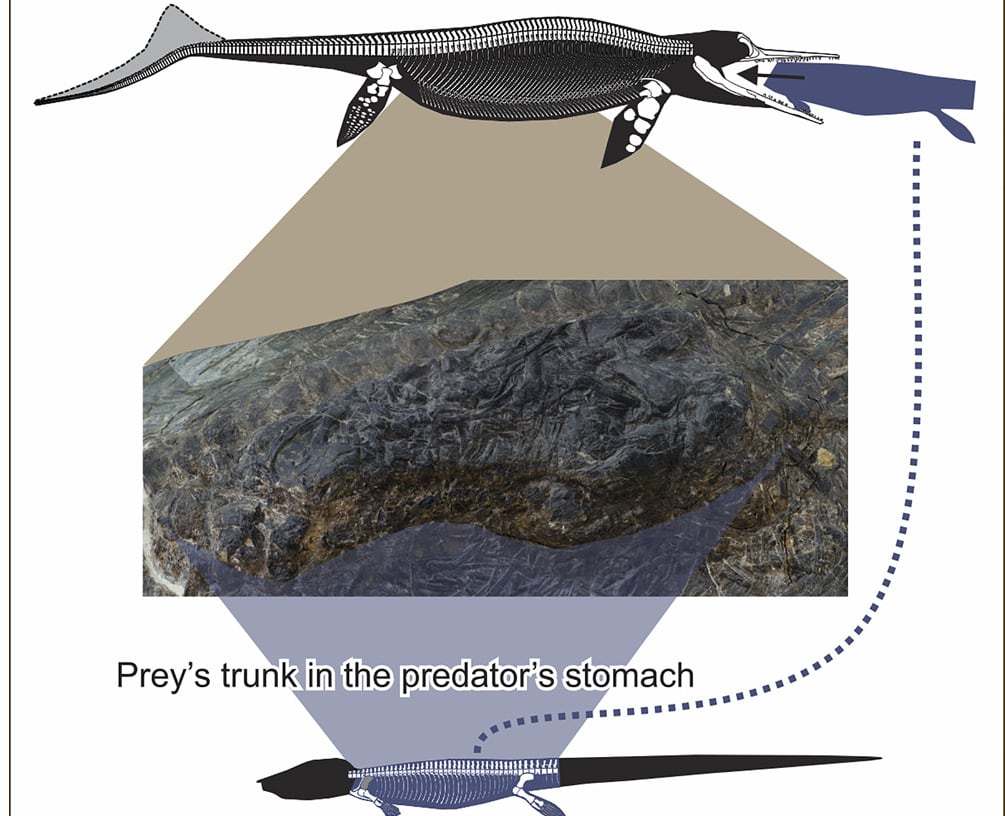 An international group of researchers in China have discovered a five meter Ichthyosaur fossil with a 4m Thalattosaur in its belly, marking what the r

10 Parson’s Chameleons Hatch at Chester Zoo
New Yorker Finds Green Anole Lizard Head In Her Kale Salad
Role Reversal: Snake Is Not A Problem For Newscaster But Gecko Is

An international group of researchers in China have discovered a five meter Ichthyosaur fossil with a 4m Thalattosaur in its belly, marking what the researchers believe to be the first documented instance of predation on megafauna (animals equal to or larger than humans) by marine tetrapods.

The predator, a Middle Triassic ichthyosaur had grasping teeth and swallowed the body trunk of the slightly smaller Thalattosaur in several pieces. The fossil shows that megafaunal predation most likely started with multiple lineages of marine reptiles about 242–243 million years ago.

Prior to the discovery of this fossil, circumstantial evidence was wildly used to determine the diet of fossil marine reptiles. Marine reptiles with large teeth with cutting edges were labeled as apex predators even though no record existed of their diets. How the predator ate the prey is also discussed.

“Ingestion of the prey may have been aided by a combination of inertial feeding and placement of the prey above the water to utilize gravity with least counteraction from buoyancy,” researchers Da-Yong Jiang, Ryosuke Motani, Andrea Tintori ,Xue Wang, Hao Lu wrote. “The use of gravity to aid ingestion is known among marine mammals 2017), as well as terrestrial ingestion of large prey by Varanus.”

The researchers identified the prey as the Thalattosaur Xinpusaurus xingyiensis, based on the similarities in its skeleton in both size and shape.

The complete paper, “Evidence Supporting Predation of 4-m Marine Reptile by Triassic Megapredator” can be read on the Cell.com website.