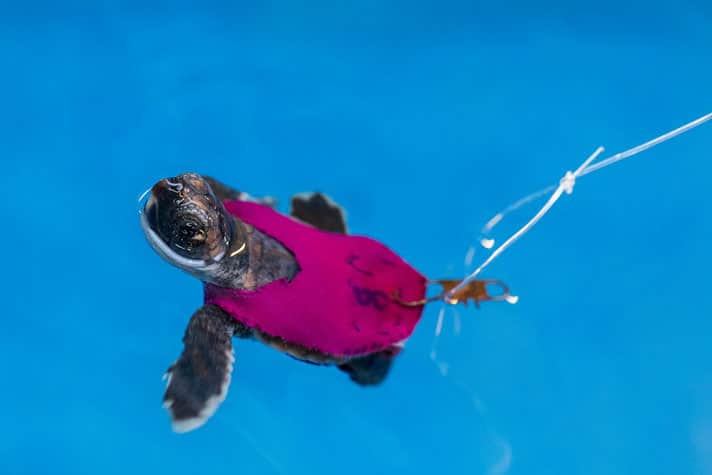 Researchers had expected the disoriented turtles to expend more energy than those collected from the nests, but found that the hatchlings were very proficient in determining when to take a rest

Researchers with Florida Atlantic University wanted to determine how artificial lights affect hatchling sea turtle stamina as they race toward the ocean, so they set up a turtle treadmill, (a really tiny one) to measure stamina in the reptiles as well as time and energy expended in the simulated environment. 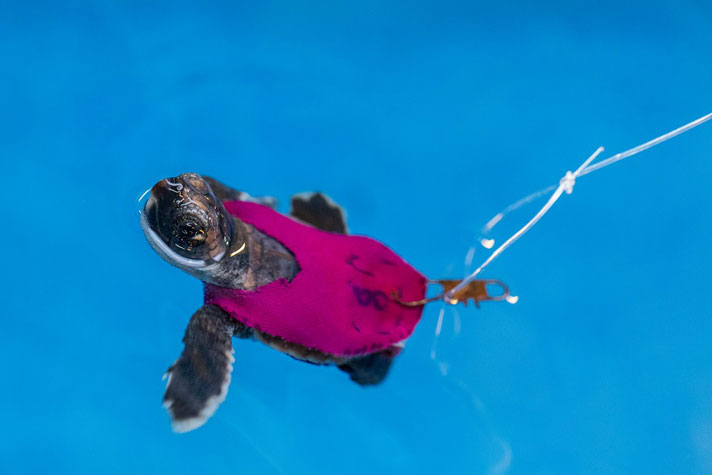 Researchers had expected the disoriented turtles to expend more energy than those collected from the nests, but found that the hatchlings were very proficient in determining when to take a rest.

The researchers, led by Sarah Milton, collected 150 loggerhead and green sea turtle hatchlings from the Florida coast at Palm Beach County and simulated lighting that is often found on an urban Florida beach and placed the hatchlings on tiny treadmills, measuring the reptiles’ oxygen intake, lactate levels, and compared them with disoriented and normal hatchlings they found on the beach, according to a news story on the university’s website.

“What prompted our study was the desire to understand what happens to these hatchlings after they spend hours crawling on the beach because they are disoriented,” Sarah L. Milton, Ph.D., lead author and associate professor of biological sciences at FAU’s College of Science, told the university’s News Desk.

“We wanted to know if they would even be able to swim after crawling 500 meters or more, which could take them as long as seven hours to complete.”

They had expected the disoriented turtles to expend more energy than those collected from the nests, but found that the hatchlings were very proficient in determining when to take a rest.

“We were completely surprised by the results of this study,” Milton said. “We were expecting that the hatchlings would be really tired from the extended crawling and that they would not be able to swim well. It turned out not to be the case and that they are in fact crawling machines. They crawl and rest, crawl and rest and that’s why they weren’t too tired to swim.”

Although the hatchlings showed significant stamina while on the beach, the fact that what should take minutes for the hatchlings to reach the ocean often takes hours due to urban lighting, and this leaves the reptiles more vulnerable as they try and find their way to the ocean.

“One of the goals of the Florida Fish and Wildlife Conservation Commission is to reduce hatchling disorientation and our study provides the scientific basis to support lighting ordinances during turtle hatching season,” Milton said. “We all need to do our part in helping to conserve these incredible animals.”

All the sea turtles collected for the study were released.

The researchers published their paper, “The effects of extended crawling on the physiology and swim performance of loggerhead and green sea turtle hatchlings” in the Journal of Experimental Biology.