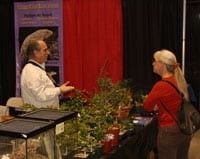 It was my first solo mission to a reptile show, as the rest of the REPTILES staff were absent for various health and personal reasons. Normally, we stroll the aisles together and chitchat with all the different vendors. This time was a little different, as I wasn’t distracted by all of the various work functions that normally dictate my trips to reptile shows and I was able to really concentrate on the photography. It was my first time attending that I really felt like an attendee and not industry folk. 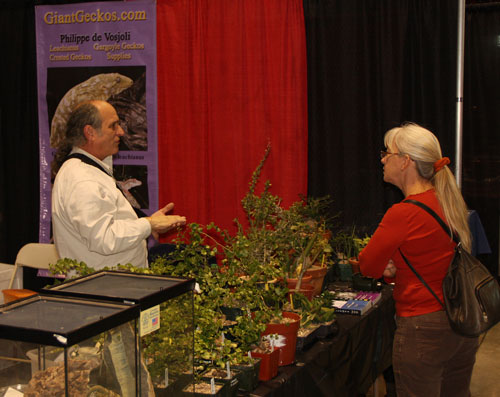 Parking, $9.00. Tickets, $10.00. Getting one-on-one face time with herp legend Philippe de Vosjoli … priceless. Check out the full slideshow of pics at the end of the blog.

I entered the show and received, as usual, a warm welcome from show organizer Ramy Guirguis. He immediately invited me upstairs so I could get some photos of the show floor from above. I was really happy to get the chance to do this, as I’ve been to this show before and never captured this photograph. The shot really sets the scene for the size of the show. Many of our readers have never been to a show this large, some have never even been to a show, so maybe this picture will help you decide to attend a large reptile show in the future.

I take pictures for the Herper Headshotz quiz on ReptileChannel and someone I’ve been trying to get for a while now is Kerry King from Slayer. When not shredding metal, Kerry works with boas and pythons. He’s had a booth at a couple of Southern California reptile shows recently and I always try to get his picture and always fall short for some reason. This time, I was set for success. I saw Kerry step out from his booth about 20 feet away from me as I walked down an aisle. I stopped in my tracks, withdrew a Herper Headshotz form and pen from my pocket and took up a broad stance so as he could not get by me this time. Just as I planted my second foot, he stepped out from his booth and turned the opposite direction down the aisle. I gave a halfhearted chase, but didn’t want to knock anyone over in the populated aisle. I mean, I could always get his picture later, right?

Wrong. I stalked Kerry’s booth throughout the day and he was never there when I patrolled past. So, I failed. Again. But I’ll get Kerry King one of these days!

There were some fun booths at this show that you don’t always see at a reptile show. There was a face painting booth, and a balloon booth with a guy that makes hats and stuff out of balloons. This makes the whole show a more interactive and fun experience for the family. Reptile shows are really becoming a day of entertainment. I wonder how many people come to reptile shows just to look at all the great stuff with no intention to purchase?

Geico Insurance was also there. They’ve been at the last couple Southern California reptile shows. They are always a busy booth because they have lots of free stuff. They had a ball drop, kind of like Plinko on The Price Is Right, but with a ball instead of a disc. Drop the ball and you’re guaranteed a prize. It could be a t-shirt, knit cap, metal water bottle, cloth grocery bag, or glow in the dark pen. It was popular game and I even gave it a go and landed a free t-shirt.

I always take notice when animals are at the show that I don’t see much. So I blocked, err, I mean stood, in front of the mud puppies for a while and studied them. It was really cool to see them up close, especially after we had just run the article on the similar axolotl in the January 2011 issue. I took a couple of pics, but they didn’t turn out well. It’s not easy to shoot down through water. But, one mud puppy did come up for air and gave me a little smile and a wink. I captured it, not my best work, but you get the picture (pun intended).

I was surprised to see more invertebrates at the show than usual. Usually there is one or two booths that has a couple of invertebrates among their herps. This time there were two invert-only booths and several more herp-invert combo booths. I managed to snap a few pics, the one of the rose hair tarantula in the slideshow being my favorite. It's always fun when the invert crowd joins in with the herp crowd, don't you think?

The scaleless bearded dragon really stood out as far as texture, or lack of texture, was concerned. It was so smooth and soft it is almost indescribable. It was a great model to photograph and seemed to change poses for me almost as I would have directed it to, should bearded dragons understand directions. Take a look at the shot in slideshow, the skin is really something else. I’d like to thank the Predators Reptile Center, and the Santans booth for obliging me and pulling the bearded dragon out of its cozy tank for me to photograph up close.

Second on the texture list were the beaded lizards. These guys were cool! I have never seen them at a show before and wasn’t sure if the people at Horridum Angeli Reptiles would take them out of their tanks, as they’re venomous, but they were happy to do so! As a result, I landed one of the best shots of the day as the beaded lizard flicked out its tongue to taste the air. The beads on this animal really pop in the photo! I never realized how “beaded” beaded lizards were. The texture was unbelievable. They are truly beautiful lizards.

The eastern indigo snake has always been a favorite of mine. What looks to be a conservative, glossy black snake, takes on an amazing metallic iridescence when the light hits it, similar to the rainbow boas. I’ve seen rainbow boas twinkle before, but never an indigo. I managed to capture this iridescence in a photo that I’m sure you’ll enjoy. Robert Bruce is a great guy and he’s got an article in the works for REPTILES magazine and a care sheet for ReptileChannel, so stay tuned.

Enjoy the pics in the slideshow below. I hope you have as much fun viewing them as I did taking them. One quick, final shout-out goes to Steve Sykes of Geckos Etc. Steve patiently herded the knob-tailed gecko you’ll see below so I could take a couple of pics. The pics turned out great, which you’d never guess if you saw how the photo shoot went down. 1) Hands cupped around the gecko. 2) Removal of hands. 3) One instantaneous photo. 4) Gecko attempting to jump off the table. 5) Hand cupping. 6) Repeat.