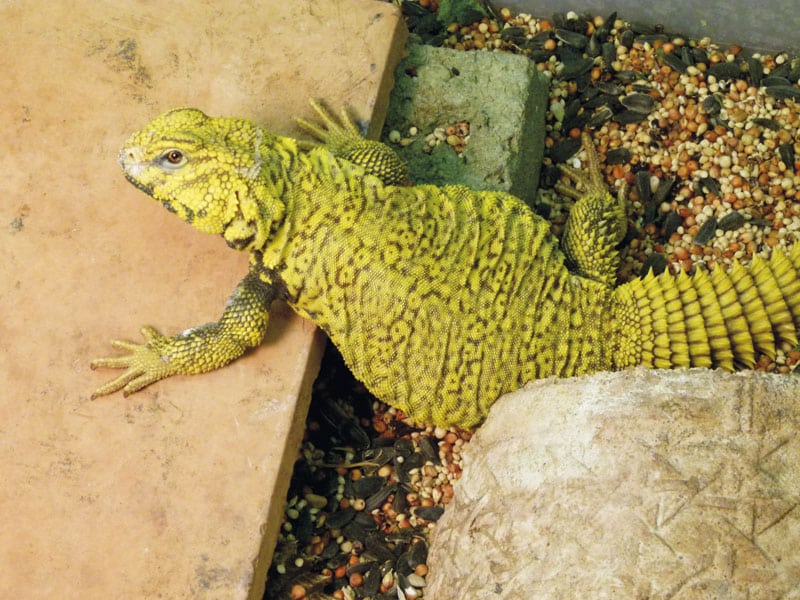 The popularity of the uromastyx (Uromastyx spp.) has greatly increased in recent years, and both imports and captive-bred hatchlings are available for some species. Many species that have been available in the past, however, are no longer imported due to the political climate in their countries of origin. The difficulty in breeding uromastyx, coupled with sporadic importation and increased demand, has therefore kept their prices high. In this article, I will provide care information for this unique genus of lizards, as well as basic tips for hobbyists who may want to attempt breeding them.

The lizards are commonly referred to as spiny-tailed lizards, dabb lizards, mastigures or, simply, uromastyx or “uros.” Their native range includes North Africa, the Middle East and parts of Asia and India, where they inhabit desert regions with sparse vegetation and limited rainfall. They dig long burrows or seek protection from the elements under rocks or in rocky crevices. They are sun-loving lizards and will bask on rocks or the edge of their burrows for long periods. Most species grow to a total length of about 12 inches, with some slightly larger or smaller. The Egyptian uromastyx is the largest species at about 3 feet.

The Uromastyx genus consists of at least 16 species. There is continuing debate on classifications, and the following list is taken from Thomas Wilms’ book, Uromastyx: Natural History, Captive Care, Breeding (Herpeton Verlag, 2005).

Uromastyx acanthinura. There are two subspecies: U a. acanthinura from southern Tunisia, northwest Libya and eastern Algeria, and U. a. nigriventris from Morocco and western Algeria. This habitat is desert and semi-desert with sparse vegetation, rocky steppes, boulders and gravel. The winters are generally mild; however, temporary frosts may occur. During winter (October to February), the uromastyx have reduced activity levels, though they may be observed on warm days.

Uromastyx aegyptia. There are two subspecies: U. a. aegyptia found in northeast Egypt, Israel and northwest Saudi Arabia, and U. a. microlepis, which is found in most of the desert areas of the Arabian peninsula, including Saudi Arabia, Yemen, Oman, United Arab Emirates, Qatar, Kuwait, Jordan, Syria and Iraq. The habitat is open sand desert areas with gravel and crushed stone. Winters may experience occasional frosts.

Uromastyx alfredschmidti is found in southeast Algeria and southwest Libya

Over the past decade, many different uromastyx species have been imported into the United States. Some have been imported in large numbers and have wholesaled for $20 to $30 each. Others, such as U. thomasi, have arrived in extremely small numbers, demanding prices well above $1,000 each. Political unrest in areas of North Africa and the Middle East, too, has resulted in species that were once available at reasonable prices being no longer available.

Two of the most common species currently available in the pet trade are the Mali uromastyx (U. dispar), with males having a black head and legs with a yellow pattern on the back (females may mimic this coloration, but are typically brown or tan), and the Saharan uromastyx (U. geyri), males of which may exhibit a bright yellow or orange coloration (again, with females generally a more plain tan). Both have been imported in great numbers. Other species seen in the pet trade include the beautiful ornate uro (U. ornata), the Egyptian (U. aegyptia), Moroccan (U. acanthinura) and a few others.

Due to debate over classifications and a wide range of uromastyx common names, it can sometimes be difficult to know the species to which a dealer is referring. The first Mali uros I obtained were classified as U. acanthinura, but currently you will see them for sale as either U. dispar, U. maliensis or U. d. maliensis. 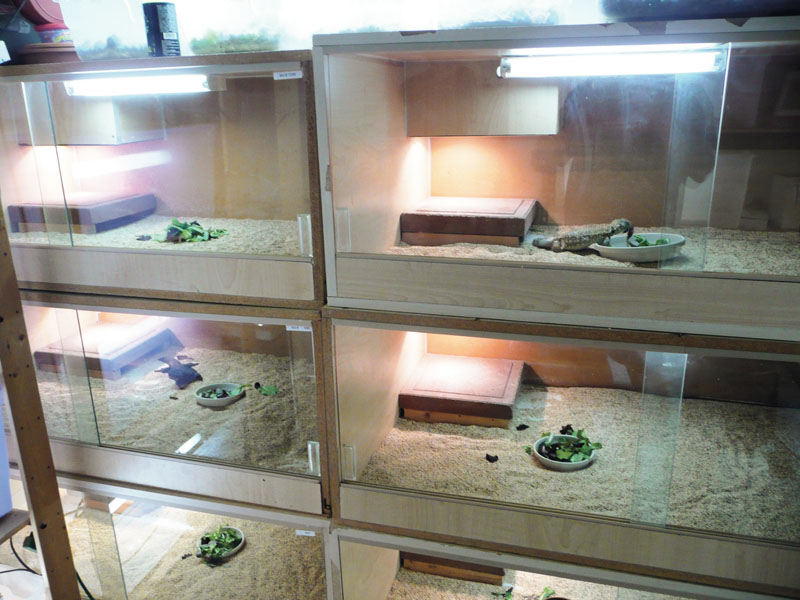 Uromastyx are heat-loving desert species. In Arizona, I have kept several species, including the Mali, Egyptian and Indian (U. hardwickii) outdoors year round, and they even bred outdoors. Some of the other species should do well in outdoor enclosures, but these three are the only species of which I am specifically aware that have successfully hatched out of the ground in outdoor enclosures.

The simplest indoor enclosure for a pair of adult uros (but not the large Egyptian, which would need more space) will measure at least 30 inches by 48 inches, and will contain a basking block that  can double as a hide area (a 11⁄2 to 2-inch-thick strip of wood can be glued to the bottom of the block to prevent it from harming lizards that may burrow underneath), a substrate of bird seed, full-spectrum lighting and a basking light hot enough to raise the basking block’s surface temperature to 115 to 120 degrees Fahrenheit.

The key to maintaining uros successfully is proper lighting and temperatures. While the basking site is maintained at 115 to 120 degrees, the rest of the enclosure may be kept at 85 to 90 degrees. A drop in temperature at night is acceptable.

Hatchlings may be kept in the same manner with one major exception: They may be kept in groups because they do not display the territorial aggression of the adults.

Uromastyx are primarily herbivores, but they will eat an occasional insect when available. Fresh leafy greens, various seeds, warmed-up frozen mixed veggies, Mazuri Tortoise Diet and various flowers can make up the majority of the diet. A varied diet is recommended; however, commercially available “spring mixes” can be the staple, along with fresh flowers, such as rose, hibiscus and Cape honeysuckle.

Calcium is a critical nutrient, especially for growing hatchlings and egg-producing females, in which it helps to build strong eggshells. It also builds strong bones and plays a role in muscle and nerve functioning. The primary cause of a calcium deficiency is the lack of calcium and vitamin D3 in the diet. Light bulbs that emit UVB (available in pet stores that sell reptile supplies) or natural sunlight will allow your uromastyx to produce vitamin D3, and this is critical to its ability to absorb and use the calcium it obtains from its diet. If calcium is lacking in the diet, the body will pull it from another source, such as the lizard’s bones, resulting in metabolic bone disease. But if you provide your uros with a varied diet that is high in calcium, as well as access to natural sunlight or UVB light, additional calcium or vitamin D3 supplementation should not be required.

Insects, such as superworms, may be offered on occasion, especially to females after laying eggs or uros that need to add weight. Water is obtained from the food uromastyx consume, but thin or newly imported specimens may be offered water or even soaked in warm water. Uros may also drink droplets off misted spring mix or the walls of their enclosure (that said, don’t mist too much — you don’t want to create a humid enclosure for these desert lizards). Providing a water dish is not necessary.

With the onset of the winter months, reduce the length of your adult uros’ daylight to eight hours per day, and lower their ambient temperature into the 60s to low 70s, with a basking area of about 85 degrees. The cooler temperatures will result in less uro activity, and less food intake. Greens may still be offered during this period, but food intake will be low, if any. The basking light allows the uros to warm enough to digest and empty their gut, and it will also stimulate their immune system (though less-than-healthy uros should not experience a cool-down).Breeding uromastyx is a challenge and there is still much to learn. The need for a cool-down period is debated, but it is generally accepted that some length of brumation or a cooling period is required to cycle the lizards for breeding.

The actual length of cooling may vary. In my outdoor pens, my uros experience natural temperature drops and remain inactive for three or four months during the winter. However, for uros kept in indoor cages, a cooling period of 60 days should be sufficient. Each species has slightly different requirements, and the actual cooling temperature and length of cooling should be evaluated based on the health and egg viability of the uromastyx species you’re trying to breed.

A nest box may be added to the indoor enclosure, containing a mixture of sand and soil. I’ve also used peat moss in the mixture to help hold moisture so the female uro can easily dig a tunnel in which to deposit her eggs. A Rubbermaid box with a 3-inch oval hole cut in the side works well, with flexible tubing attached to the hole to create a tunnel for the lizard to enter the nest box.

Once the eggs are laid, they can be moved to a plastic shoebox containing an incubation medium of sand, perlite, peat moss or dirt. Incubation temperatures can be between 92 and 94 degrees. A nighttime drop of 5 to 10 degrees should not be a problem, as I have successfully incubated uromastyx eggs in the mid 80s. If you use a commercial incubator, a temperature of 93 degrees may be selected if incubating at a constant temperature. Eggs will hatch in two to three months, depending on the temperature, and warmer temperatures result in faster incubation.

Regardless of the Uromastyx species you decide to keep, you are in for a treat. These lizards have personality and are said to recognize their owners. For the dedicated keeper willing to put in the effort to win their trust, they are a rewarding pet.

JERRY FIFE has traveled the world to study reptiles. He maintains and breeds a number of lizard and tortoise species at his home in Phoenix, Ariz. He is the author of several books, including Iguanas: A Pictoral Guide to Iguanas of the World and Their Care in Captivity. Visit his website at fifereptiles.com.