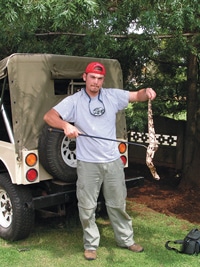 Planning a trip to South Africa is not as daunting as it sounds. Tourism is South Africa’s main industry, so the country is geared for it. Th

Planning a trip to South Africa is not as daunting as it sounds. Tourism is South Africa’s main industry, so the country is geared for it. The trick is getting a group of people together because most tour operators don’t take individuals out. 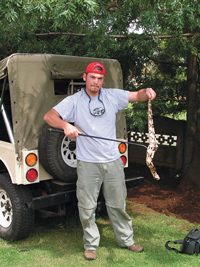 Ten days to three weeks is the optimal amount of time to spend in South Africa. It just depends on how much you want to see. Early to mid-November is the best time to go. Ticket prices are low, and summer is starting in the Southern Hemisphere.

From London, England, the flight is 11 hours, and you land in Johannesburg. I suggest you get out of Johannesburg and get into the “good” snake areas as soon as possible. A drive through downtown Johannesburg should not be missed, but I advise against spending too much time there. The city can be a bit unforgiving to trusting tourists.

Thirty minutes out of the city, things start calming down, and animals start occurring. Flying by the seat of your pants and hoping to hook up with local herpers to show you the good spots is one approach.

Traveling independently is possible, and it can be fun, but just imagine landing in Los Angeles, Calif., for the first time and trying to find rattlesnakes. You might be successful, but you also might end up in a really bad neighborhood.

Your other option is to have a tour guide. Although this is a bit more costly, the benefits far outweigh the costs.

Mike Perry of African Reptiles and Venom has been doing these tours for a while. He made his name through documentaries and films, and more recently he has become the sole venom supplier to the South African Vaccine Producers.

Perry gave me a brief outline of where to go. In a 36-hour period, I saw five brown house snakes (Lamprophis fuliginosus), one olive house snake (Lamprophis spp.), a white-throated monitor (Varanus albigularis), a Wahlberg’s velvety gecko (Homopholis wahlbergi), a Mozambique spitting cobra and an almost 7-foot-long black mamba. Unfortunately, a farmer had just shot the mamba when we arrived. The area was teeming with snakes.

One place I would tour with an experienced guide is Mpumalanga, formerly known as the Eastern Transvaal. The approximate cost per day is about $100, which is all-inclusive.

Plan on spending a week or so in Mpumalanga and then heading down to South Africa’s east coast. Many game reserves are down into KwaZulu-Natal and along the coast. Obviously, a tour should include some big-game viewing, and these reserves will more than quench anyone’s taste for large mammals.