Unlike Xenopus laevis, which reaches sexual maturity at 1 year old, Silurana frogs reach maturity when they’re 4 to 6 months old. Typically smaller and proportionally longer and narrower than females, males have nuptial pads, which are noticeably dark surfaces on the inside of their forearms and fingers. These pads are more prominent during the mating season and help males retain their grip on females during amplexus. 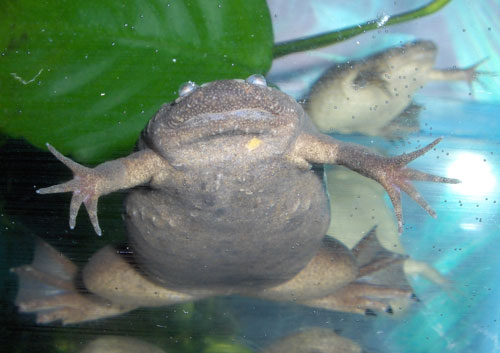 Female Silurana clawed frogs, such as this S. tropicalis, are typically plumper than males.

In captivity you can simulate the pre-breeding conditions by increasing the water temperature while decreasing the depth to a couple inches for four to eight weeks. Refilling the aquarium with cooler water after that time usually entices the frogs to breed.

There’s an alternative way to breed these frogs, but it may not be available to most herpkeepers. A glycoprotein hormone called human chorionic gonadotropin, which the tissue of an early human embryo produces, is involved. HCG is injected into the dorsal lymph sac, which is just above the cloaca, of both the male and female frog to stimulate amplexus and ovulation. Today biologists and commercial breeders continue using HCG to induce breeding in their Xenopus colonies.

Once prepped by the water method or the hormone method, the frog pair goes into amplexus within a couple of hours. Amplexus, when the male fertilizes eggs while the female releases them, usually occurs at night and can take several hours to complete. It is best to remove the adults after the couple separates to keep them from voraciously eating the eggs.

Tadpoles typically develop within three to four days. They cling to the sides of their container while feeding off their yoke sacks. After about 10 days, they begin to swim in search of food. Feed them commercially prepared tadpole food twice daily. Tadpoles continue to filter feed until they lose their tails and metamorphose into froglets, which takes about six to eight weeks.