What’s the difference between piebald, pied and pied-sided when describing snakes?

A. All those terms refer to the same pigmentation anomaly: piebaldism. Pied is just alternate slang for piebald, the descriptive adjective. It’s a genetically controlled trait that prevents colors from filling in where they belong on a normal specimen. White patches are left instead. The trait results in some creatures having a portion of their bodies devoid of color, but others are close to 100 percent stark white.

Ball pythons (Python regius) and corn snakes (Pantherophis guttatus) are two species that led the way in piebaldism becoming established. This is probably because more people were working with them. I first saw it in a corn snake from the Florida Keys back in the late 1970s, but that bloodline never arose as a viable new morph, apparently due to a fatal gene linked to it. 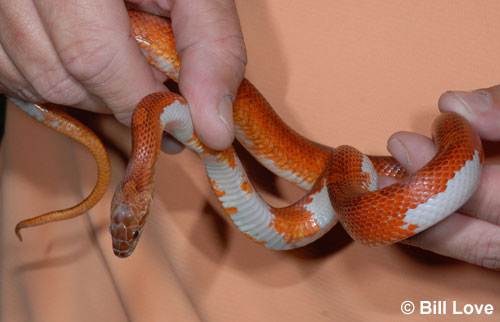 A new bloodline of blood-red corn snakes has been coined “pied-sided” due to a tendency for the white to show primarily on the snake’s belly and sides.

Piebald ball pythons entered the trade when Peter Kahl produced the first captive-bred examples from an animal imported from Ghana, Africa. His first captive-bred hatchling in 1997 proved the unusual looks were inherited as a simple recessive trait. It, more than any other morph, helped launch the current ball python craze.

In corn snakes, piebaldism has recently been revived in a line of blood-red corns. In this form, the white tends to “hug” the belly and lower sides of the body, initiating the phrase “pied-sided” for the trait as it has manifested itself so far. A similar anomaly also occurs in Persian rat snakes (Zamenis persica). Breeders of both species hope their animals eventually capture some of the popularity that piebald ball pythons are presently enjoying.