Two saltwater crocodiles (Crocodylus porosus) and two Cuban crocodiles (C. rhombifer) arrived yesterday at the Phoenix Herpetological Society from Gatorland in Florida in what amounted to a herp swap. In exchange for the crocodiles, Gatorland received 10 American alligators (A. mississippiensis). The PHS also shipped three reticulated pythons ( Python reticulatus)  that were rescued in northern Arizona during the filming of the Animal Planet show "Hoarders," as well as a 15 foot tiger reticulated python that weighs more than 150 pounds. 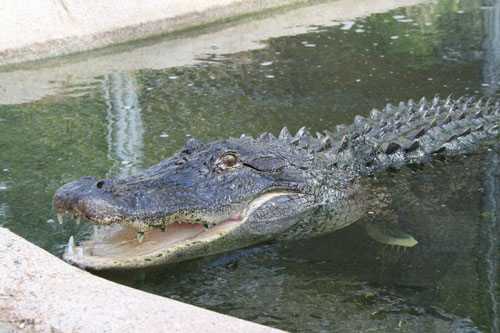 The saltwater crocodiles measure 7 feet and one of the Cuban crocodiles is close to 5 feet in length. The alligators range in size from 16 inches to 8 1/2 feet long, with Amos, the largest gator in the trade, tipping the scales at around 300 pounds. The animals were transported to Texas by truck, where the exchange took place because they were too heavy for airline travel. When the crocodiles arrived at the PHS, they were placed into a heated, 75 degree pond.

In addition to the new crocodiles, the Phoenix Herpetological Society houses lizards, turtles, tortoises, and a newly constructed "Venom Room" which houses the largest collection of venomous snakes in the southwestern United States.

Tours of the sanctuary are available via appointment at a cost of $20 for adults, $15 for ages 4-17, and free for children under 3. Booking is available by contacting the PHS at 480-513-4377 or via email at Debbie@phoenixherp.com.