Because Atelopus zeteki is so critically endangered, Panamanian authorities have severely limited exporting specimens from the wild.

Is A Snake A Service Animal?
How Is Your Relationship With Your Pets During COVID-19 Pandemic?
University of Otago Frog Expert Prof. Phil Bishop Receives Lifetime Achievement Award

The endangered Panamanian golden frog (Atelopus zeteki) is considered a cultural symbol and a national treasure in its native Panama. Its distribution is limited to an isolated area around the mountains in the western central region known as El Valle de Anton. Even the pre-Colombian indigenous people considered the golden frog sacred because of its color and uniqueness. They made gold talismans in its likeness to symbolize good fortune and health. Currently, images of golden frogs can be found throughout Panama on T-shirts, posters, maps and even lottery tickets. However, despite its current widespread notoriety throughout the country, few Panamanians have ever seen a live Atelopus zeteki specimen.

For years the taxonomic status of these amphibians has been debated, and at one time they were considered to be in their own family, the Atelopodidae. Currently, however, these “frogs” are classified as true toads and are now placed within the family Bufonidae.

Golden frogs are found in lowland-rain-forest and cloud-forest habitats at elevations ranging from 1,300 to 3,950 feet. Originally described by Emmett R. Dunn in 1933 as a subspecies of Atelopus varius, the golden frog is now recognized as a distinct species based on unique skin toxins and vocalizations. As its common name suggests, the golden frog is usually a brilliant gold, yellow or orange color, and it might have black body markings.

Like the poison frogs of the Dendrobatidae family, golden frogs obtain their skin toxins from their natural diet of various small invertebrates, mainly ants containing formic acid, which is irritating to animals’ eyes, skin and mucous membranes. After golden frogs ingest these ants, they are able to utilize the toxins for their defense. However, unlike poison frogs it may take them more than half a year before these toxins are fully developed. 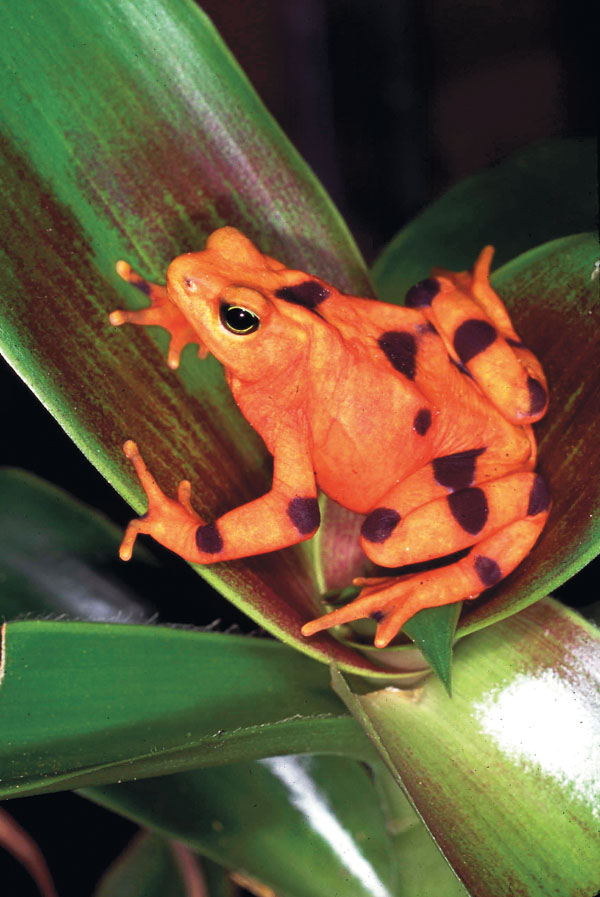 In 1975 CITES listed the Panamanian golden frog as a protected species.

This species is sexually dimorphic, and like all Atelopus species, females tend to be larger and heavier than males. A mature female can grow to nearly 21⁄4 inches and weigh as much as a half-ounce. Males reach adult size between 11⁄2 to 13⁄4 inches and weigh a quarter of an ounce. Given that research on golden frogs only began in earnest in 1999, it is not exactly known what their natural life span is for certain. However, several individuals have lived as long as nine years under captive conditions.

The genus Atelopus is an extremely diverse one and includes nearly 70 species and subspecies. All occur in Central and South America. Only the toads in the genus Bufo are more numerous and widespread. Some species have been mistakenly referred to as “harlequin toads,” and in the past they have been available in the pet trade. Most species, however, are rare and are localized to small tracts of forests; therefore, they seldom find their way into captivity.

The Convention on International Trade in Endangered Species of Wild Fauna and Flora (CITES) listed A. zeteki as a protected species (Appendix I) in July 1975, and the United States listed it as an endangered species in June 1976.

In the 1940s Panamanian golden frogs were extremely common in El Valle de Anton. This soon changed when overcollecting by local children began to diminish their numbers. It was not uncommon at the time for youngsters to catch and keep as many of the abundant toads as they wanted. It was even reported that some children would tie a string to a live toad’s legs and swing it around their heads as if the amphibians were nothing more than toys.

Years later, the use of pesticides by local farmers, as well as other airborne and ground pollutants, contributed to further reducing the golden frog population. Habitat alteration by logging has also been a factor in the species’ decline. A small number of toads are still collected illegally for the international pet trade and some local Panamanian zoos and hotels in an effort to draw visitors to their facilities.

Nowadays, a major threat to the golden frog is the deadly chytrid fungus. This issue is threatening the very survival of the species and has recently reduced the wild population to only a handful of specimens. Some zoos actually estimate more than 90 percent of the population has been decimated.

Like their wild counterparts, captive golden frogs are fed a wide range of invertebrates, including crickets, fruit flies, flower beetles (Tribolium spp.) and even termites. These insects are first fed a highly nutritious diet to ensure that they are properly gut-loaded and healthy, and then they are lightly dusted with various vitamins and calcium supplements just before being fed to golden frogs.

Ideal enclosure temperatures usually vary between 70 and 85 degrees Fahrenheit, and humidity should be above 80 percent. Enclosure size varies depending on whether the animals are used as display specimens in U.S. zoos, where they may be kept in 3- to 5-foot-long enclosures, or whether they were housed in quarantine in Panama, where they are kept in 10- to 20-gallon tanks. If they are kept for breeding, a 10-gallon aquarium is often sufficient. Substrate can be anything from moist paper towels to moss, gravel, cork bark and frog-safe soil found at pet stores. A medium dish of shallow water big enough for the frogs to soak must be provided, especially if breeding is the goal.

In the wild Panamanian golden frogs breed during the dry season (December through April) when water levels in the streams are shallower. Temperatures during this time often range between the low 70s to high 90s. Males first climb down amid large boulders and await the arrival of females at the water’s edge.

Due to the noise of fast-flowing streams and waterfalls typical of these habitats, males have evolved an interesting method of communication known as “semaphoring.” They physically signal females using their legs. Although they can vocalize to attract mates (females can also vocalize by emitting soft chirping calls), males sometimes signal females with deliberate limb movements and specific hand-waving gestures. Males also semaphore to warn other males of territorial ranges, and should one male stray into another’s territory, a wrestling match may ensue. This form of communication is much more effective where males’ soft calls might not be heard against a background of loud, rushing water.

Golden Poison Frog Gets A Sanctuary In Colombia

During the breeding season, males use their well-developed nuptial pads (hardened, calluslike structures on the outside of the “thumb”) to dig into and hold firmly onto the females’ bodies, and they remain in amplexus for the duration of the prolonged breeding season. In captivity this breeding behavior may last anywhere from several days to nearly two months!

The female then deposits her eggs beneath large rocks at the bottom of the stream. These eggs, which lack pigment, are completely white, and they are extremely sensitive to ultraviolet light. They usually hatch in three to six days. It can then take anywhere from four to eight months depending on water temperature for the larvae to metamorphose into miniature toadlets. Young golden frogs are green and black, and they are well-camouflaged to match their surroundings. This camouflage helps protect them from predators because they initially lack the skin toxins of their elders.

Because Atelopus zeteki is so critically endangered, Panamanian authorities have severely limited exporting specimens from the wild. To that end, a breeding and rearing facility of golden frogs has been set up in El Valle de Anton at the El Nispero Zoo. With the financial support and guidance of nearly 50 U.S. institutions, including zoos and herp societies, this local Panamanian zoo hopes to maintain a viable breeding population of these unique anurans before time runs out and another irreplaceable treasure is forever lost.

Fortunately for golden frogs, a number of institutions have formed an alliance in an attempt to save the species from extinction. Currently, some 1,500 toads are being maintained in nearly 40 zoos and aquariums throughout the United States. Formerly known as the Baltimore Zoo, The Maryland Zoo in Baltimore holds the largest number of toads maintained in captivity: about 700 specimens. Among other zoos with the toads, the National Zoo in Washington, D.C., has about 130; the Detroit Zoo has nearly 100; the Houston Zoo has 20; and the Denver Zoo maintains 10. Besides merely keeping golden frogs alive, the majority of these facilities are also breeding them in hopes of someday being able to re-release the captive-bred offspring back into their historic range within Panama.