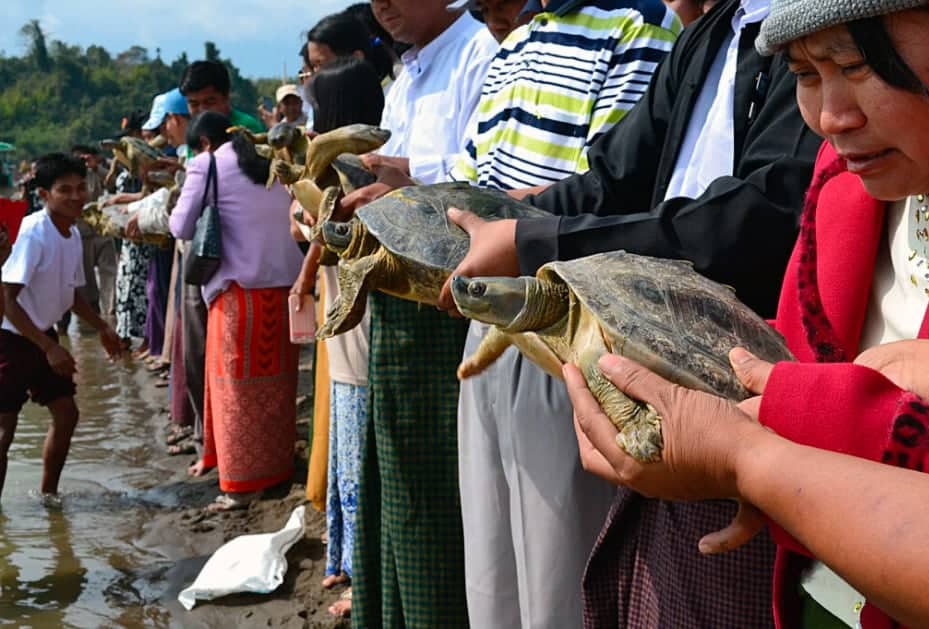 The Burmese roofed turtle (Batagur trivittata), a river turtle native to Burma, now known as Myanmar and other rivers in Asia was thought to be extinc

The Burmese roofed turtle (Batagur trivittata), a river turtle native to Burma, now known as Myanmar and other rivers in Asia was thought to be extinct about 20 years ago. Conservation efforts for the species were launched after several individual turtles were rediscovered and now the population of this turtle with the permanent smile has reached about 1,000 in captivity, including some that have been released back into the wild. The remaining turtles live in three turtle rearing facilities in Myanmar.

“We came so close to losing them,” Steven G. Platt, a herpetologist at the Wildlife Conservation Society told the New York Times. “If we didn’t intervene when we did, this turtle would have just been gone.”

The species was once thought functionally extinct in the wild until a shell from a recently killed turtle was discovered in 2001 near a village on the Dokhtawady River. Following that discovery, live specimens were discovered in a wildlife market in Hong Kong and in ponds in Mandalay. These same turtles formed the backbone for the captive breeding effort that has resulted in some 1,000 turtles.

Today, there are roughly 1,000 turtles at 3 facilities in #Myanmar.

While the species is no longer in danger of complete extinction, Platt cautions that unsustainable fishing practices remain a problem. pic.twitter.com/YUkPOQYea1

“When the species showed up in a pet shop in Hong Kong, it raised a lot of eyebrows,” Rick Hudson, president of the Turtle Survival Alliance told the New York Times. “There were a number of local dealers smuggling star tortoises out of Burma at that time, so we just assumed it had been smuggled out by the same traders.”

Five wild female turtles that were found nesting on a beach in Chindwin still go to that beach to lay eggs, and rather than capture these animals, scientists worked with the forest department and the WCS to set up a conservation stewardship program that hired locals to fence off the beach and carefully remove any eggs so they could be hatched without fear of losing them to predation, or theft.

In 2015, 60 captive raised Burmese roofed turtles, the second most endangered turtle in the world, were released by villagers working with the Wildlife Conservation Society (WCS) and the Turtle Survival Alliance (TSA).