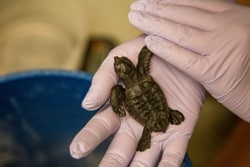 The two baby loggerheads will be released next year.

An aquarium in North Carolina is asking for your help in naming two baby loggerhead sea turtles (Caretta caretta) that are currently in their care.  The North Carolina Aquarium at Fort Fisher has been caring for the reptiles after they were excavated from their nests earlier this year. The hatchlings failed to leave the nest and make the trip to the ocean. 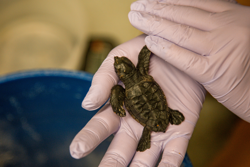 “Giving these sea turtles a name allows our guests to more deeply connect with the animals and better understand how our actions impact them and other marine animals,” said Gail Lemiec, aquarium educator.

Staff at the aquarium have selected five names to choose from: Bubbles, Hatch, Noggin, Pearl, and Scute.  Voting ends December 3.